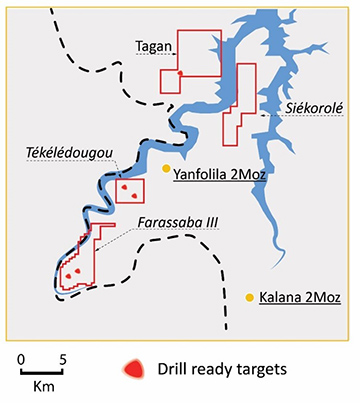 Bert Monro, CEO, comments: “We are excited to be heading back with the drill rig to permits in the Yanfolila Project Area where we have historically had some very strong results, generally in shallow oxides. These results are further encouraged when you consider the proximity to an operating gold mine.  We look forward to releasing the results as we receive them.”

Cora continues to advance a portfolio of projects located in two world class gold regions in Mali and Senegal in West Africa, namely the Yanfolila Gold Belt (south Mali) and the Kedougou-Kenieba Inlier gold belt (also known as the Kenieba Window) (west Mali / east Senegal). In addition to its flagship Sanankoro Gold Discovery, which this year received a US$21-million mandate and term sheet to fund its future development as a highly profitable standalone oxide mine, the portfolio includes the Yanfolila and Diangounte (Kenieba Window) project areas that cover 715 km² between them.

During H1 2020, exploration included the use of Cora’s owned and operated rotary air blast (RAB) drill rig at the Tagan permit within the Yanfolila Project Area. With inclined holes and depths typically up to 26 m in length, the drill rig sampled below extensive and often thick ferricrete and transported cover.

At one target, the shallow RAB drilling suggested the presence of extensions to a gold intercept of 1,7 g/t Au over 14 m achieved in an historic standalone core hole drilled by a previous permit owner.  This drilling is aiming to, initially, extend existing known mineralisation and, dependent on results, form part of a strategy to grow resources regionally.