When a mining operation based in the Copper Belt of Zambia found itself with an unexpected increase in wheel and flange wear and repair costs on a newly installed crane, it asked Konecranes Johannesburg to inspect and advise what the problem could be. 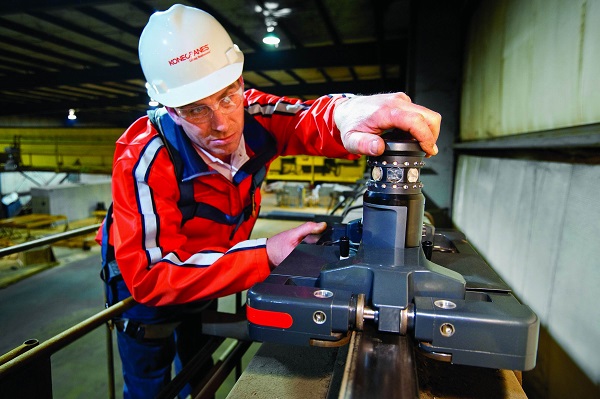 “Konecranes CraneQ Crane Geometric Survey and RailQ Runway Survey are what makes the company the leader in crane conflict resolution. When a crane is not operating at full performance the first question a customer always wants to know is what needs to be rectified and how long will it take. CraneQ and RailQ provide those answers, helping to eliminate unnecessary downtime and restoring crane operation quickly,” says Emil Berning, MD of Konecranes South Africa.

A team was dispatched to the Zambian Copper Belt, where they established that the 30 x 5-t SMARTON Goliath crane had suffered damage as a result of an incorrect set-up on site, which had a knock-on effect of making the crane run faster on one side due to crane leg damage.

“After conducting both the crane and rail assessments it was established that the crane was not only running faster on one side, but there was major wheel skewing on all of the drive wheels and the wheel flanges no longer existed. The only reason the crane stayed on track was due to the Konecrane derailment protection device which is custom fitted to all of our cranes,” says Marius Naudé, global technical support specialist for Konecranes South Africa.

The team developed a values-input spreadsheet at the Zambian site which enabled them to load and correlate all of the pertinent measurements and values to conduct an eccentric calculation. Traditionally, measurements on vertical and horizontal cambers are zero while value offset diagonal variations are acceptable between 20 mm with a skew difference of 12 mm.

“The skew difference on the damaged crane was determined to be 370 mm, which was way beyond an acceptable range whilst the wheel carriage measurement was out by 4 mm per meter on the vertical camber making a measurement difference of 1,6 m on the 200-m rail,” comments Naudé.

As a result of the inspection and analysis by Konecranes not only are the replacement wheels still rolling strongly and in a straight line after one year of service – adding some eight to 10 years of longevity to the lifespan of the crane – but the need to replace the damaged crane leg has been eliminated, saving the company nearly R1-million.

“It is essential to have engineers on site that are experienced in crane installation and set up in order to avoid mishaps that have major cost implications. I believe the expertise and professionalism that our engineers bring to crane problem solving is exemplary. The geometric and assessment analysis that we utilise through our CraneQ and RailQ applications is a unique crane problem solving technology. It is not only used to resolve operational conflicts but also to enhance our preventive maintenance and service activities,” says Berning. “It makes us the leader of the pack when it comes to getting our customers back up and running with the minimum amount of downtime incurred,” he adds.