MDS Architecture has evolved a partially built mixed-use structure in Accra, Ghana into a commercial office building by taking a practical approach to the re-imagination of the building. 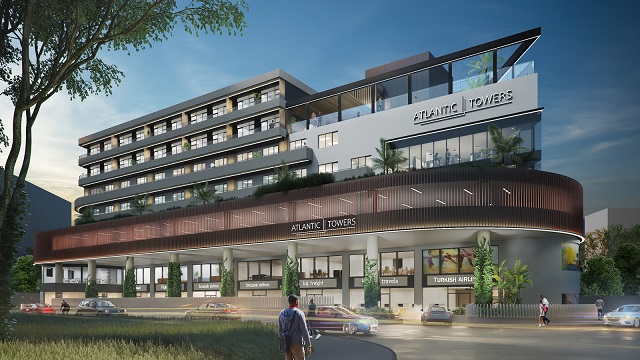 “The two buildings are linked via a bridge. Our design physically and visually links the two developments and brings a contemporary elegance to the development by working with the existing structures,” says Chad Sampson, partner at MDS Architecture.

The design has created a fresh aesthetic in this commercial area of the city. With retail stores at street level, the front façade is dominated by a rooftop garden with a striking point jutting out of the building. The angled shape forms part of an entertainment space, which also features a bar and seating, with glass balustrades inviting views over the city.

The opposite side of the building faces the existing Atlantic Tower 1 and includes a bridge to connect the two buildings.  This façade features dominant boxed-out office balconies, creating visual interest.

Atlantic Towers II includes one level of parking between the retail and office floors, a reception area as well as a gym/pilates studio.

Developers Meridien and RMB Westport developed Atlantic Towers I in 2017. The addition of the second, connected building creates a prominent presence in the area. “Having worked with the client previously, we were excited to take on the challenge of transforming a work-in-progress into a striking development with a clearer link between the two buildings,” says Sampson.

The exposed concrete of the building celebrates the raw state of the material on the exterior, which is complemented by sleek glazing. Timber slats in local hard wood timber create warmth, while the dark colour peeking from behind the shutters creates an effective contrast.

The entertainment area space was originally intended to house a swimming pool and entertainment area for a residential block. Brickwork on the corner was removed and clad with flush glazing, creating a distinctive point jutting out of the building. Instead of closing it off for privacy, the top entertainment area allowing greater visual engagement from outside the building as well as those enjoying the area and views.

The entrance to Atlantic Tower II is under cover and includes glazing to invite as much natural light into the area as possible. Landscaping brings warmth and texture, helping to create a sense of arrival at the point where the bridge structure connects the two buildings.

“Wood has been widely used in the interior of the building and bring warmth and texture to the contemporary grey and white colour palette, which is also reinforced by the exposed concrete in the interior. Diagonal lines create layering and interest in a nod to reeds and Ghanaian fabric patterns,” says Sampson.

The remaining professional team is in the process of being appointed.