On the Cover: With a wide range of materials handling equipment and technologies – all the way from telescopic handlers and log loaders to wheel loaders and reach stackers, Liebherr Africa has a solution for every materials handling job, positioning the company as a one-stop supplier across industries and applications.

For materials handling, Liebherr offers a wide variety of machines and technologies that are custom-engineered for an array of applications, including recycling, timber handling, stockpiling, material rehandling and waste handling, among others. These include material handlers (mobile, crawler and electric); reach stackers; wheel loaders; telescopic handlers; crawler tractors and crawler loaders.

A major talking point in Liebherr-Africa’s materials handling journey is its recent entry into the telescopic handler market. For the very first time, Liebherr Africa now offers a range of telescopic handlers following the introduction of Liebherr’s new generation line in the local market.

Initially rolled out to the global markets at the start of 2018, the first units arrived in the local market in September the same year, and several units are already working at various sites. Kudumba explains that the extensive line of telescopic handlers addresses the needs of several customer groups. The two model lines comprise the top-of-the range models for materials handling or production applications (identified by the suffix S), as well as the simple, cost-optimised (standard) models for stacking and lifting applications.

“The standard range is targeted at construction markets, including civil engineering, road construction, demolition and building construction. The premium range fits the bill for industrial applications, including timber, sawmill, waste recycling and compost plants, among others,” explains Kudumba.

Having established itself as a one-stop supplier for the agricultural community – representing three leading tractor brands from one stable – Dicla has in recent years bolstered its offering with a range of its own Dicla-branded materials handling solutions, as well as some leading international brands. Not only have the solutions extended the product offering, but have also allowed the company to expand its sectorial reach. 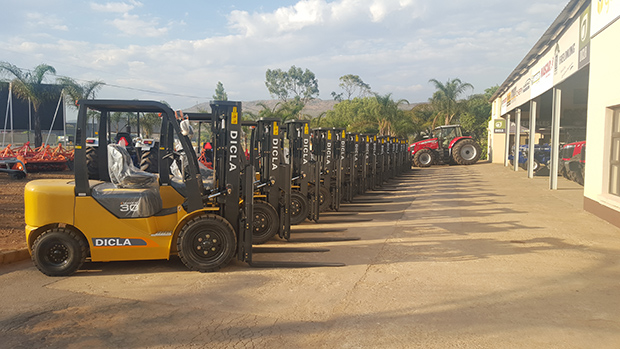 In 1993, Dirk Tijsen designed and manufactured tunnels for self-planting of vegetables. This turned out to be such a success that in no time he had 18 tunnels producing flowers and vegetables. About a year later, he was appointed as the sole distributor of vegetable seeds by a Netherlands-based company, Rijk Zwaan Seeds, while supplying the tunnels on a commercial basis as well.

In 2009, Dicla Farm and Seed (Pty) Ltd was formed, following the merger of Dicla Farm and Seed cc and Tijbros Agricultural Machinery cc. Over the years, the company has expanded its horizons by continuously adding several products and services to its stable. Today, the company supplies tunnels, net house structures, irrigation equipment, greenhouse plastic, shadenet, seedlings, tractors and agricultural implements.

Under the leadership of Johan Tijsen, who took over from his father in 2011 as MD, the company has been on a continuous growth path. The company today imports various equipment brands such as Fieldking, Agromaster and Faresin, while being dealers of  established brands such as Massey Ferguson, New Holland, Kubota, Challenger, Polaris and AUSA.

Of interest to Capital Equipment News is the addition of materials handling equipment such as forklifts, telehandlers and skid steers to the stable. This has recently been complemented by the addition of earthmoving equipment to the fold, following the company’s recent appointment as the SEM dealer some six months ago, establishing Dicla as a true one-stop shop to its customers.

New motor grader launches from SDLG and Caterpillar set new grading standards with a host of features that speak directly to increased productivity, unprecedented operator comfort and ease of service, to help maximise return on investment. 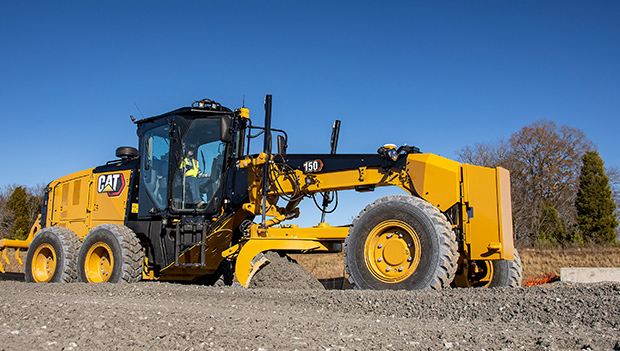 In today’s machine developments, leading original equipment manufacturers distinguish themselves by placing “the voice of the customer” at the centre of their innovations. An area that has significantly seen vast innovation in line with customer requirements over the years has been the motor grader market. Of significant interest to the customer has been the simplification of operation, operator comfort and ease of service – key parameters that have a huge influence on overall productivity and, ultimately, quick return on investment.

Two new motor grader launches from SDLG and Caterpillar are true cases in point. Caterpillar is using the upcoming CONEXPO-CON/AGG – to be held in Las Vegas from 10-14 March 2020 – to showcase its new 150 AWD motor grader. The new model’s major talking point is its all-wheel drive system, which assists with traction and manoeuvring, allowing the machine to work in any environment.

Latest from SDLG is the G9290, which marks the Chinese OEM’s entrance into the heavy-duty motor grader market. With a base operating weight of 22,9 t and a 14” wide blade as standard, the productivity of blade down force and blade pull is said to make the SDLG G9290 a strong contender in its size class.