As world leaders gathered in Madrid, Spain, for the UN Climate Change Conference (COP 25) in December last year (2019), in South Africa the contractors and project partners involved in the development of Ilanga 1, the concentrated solar power plant that forms part of Karoshoek Solar Valley Park near Upington in the Northern Cape, celebrated the first anniversary of the plant’s operation – supplying clean energy to the national grid.

The engineering, procurement and construction (EPC) contractors: a consortium comprising COBRA, SENER and EMVELO; the owner: Karoshoek Solar One, an IPP; the lenders and other key project partners were all there to mark this milestone. 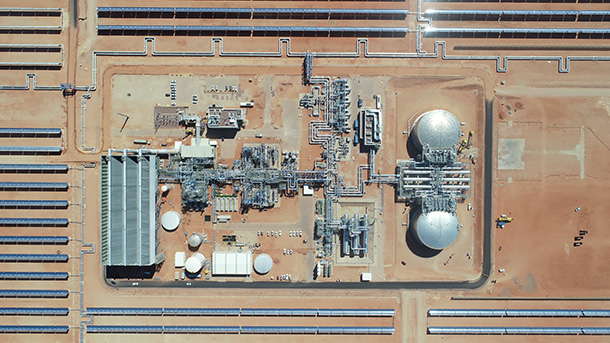 The Ilanga 1 concentrated solar power plant near Upington, Northern Cape. The solar field stretches over 335 ha with a total reflective area of 869 800 m2.

The concentrated solar power (CSP) plant contributes 100 MWe of on-demand power that is clean, sustainable and reliable. The plant has no fuel costs and emits no harmful emissions, ensuring its low carbon footprint. It is equipped with a patented molten salt storage system that allows five hours of energy storage, enabling it to continue producing electricity when there is no sunlight.

The commissioning of the plant by the EPC contractors consortium has not only brought light and power to local residents in Upington and surrounding areas, it has also created employment opportunities here.

The solar thermal power plant went into commercial operation in November 2018, within the timeline scheduled under the Power Purchase Agreement (PPA) signed between Karoshoek and Eskom. The plant continues to make a considerable contribution to the national grid and is an example of a success in the government’s Renewable Energy Independent Power Producer Procurement (REIPPP) Programme. With renewed pressure on the national power supply system, additions such as this are especially welcome.

Pedro J Cuevas, Chairman of the EPC consortium and representative for COBRA in Africa, explained: “This project – Ilanga 1 – was conceptualised in 2009, before the IPP Programme was launched, by our local partner EMVELO, with the support of some of the key players in South African industrial development, the IDC (Industrial Development Corporation) and DBSA (Development Bank of South Africa). COBRA entered into an agreement with these partners to co-develop the project. Our technology partner, SENER was incorporated into the consortium forming the design, supply and construction of the plant.

“The combination of technological know-how, construction background and local expertise provided the consortium with the resources to make the project a success. We believe that the economic impact of this project has exceeded the expectations of all the parties involved.”

Siyabonga Mbanjwa, Regional Managing Director for SENER Southern Africa, said: “This is a historic moment in South Africa’s energy transition as another renewable energy power plant, supplying reliable and sustainable energy, is operating with a notable set of results and achievements. Providing energy for around 100 000 homes and saving some 90 000 tons of CO2 each year, over 20 years, is a considerable achievement.

“Solar energy has a huge role to play in South Africa. This project demonstrates the results that the renewable sector can achieve and the possibilities that exist, particularly when our climate realities are taken into account and when selecting energy sources for the country and continent.

“Alongside our contribution to securing power, we are also pleased to make a social impact in developing South Africa’s first black-developed CSP plant, with the resulting skills development, job creation and local economic development that this project delivered. We continue to combine the provision of power with positive social and environmental outcomes,” Mbanjwa added.

The members of the EPC contractors’ consortium are involved in the construction of solar plants worldwide and in South Africa they have already assisted in the production of more than 400 MW of installed capacity in three solar thermal power plants and four photovoltaic power plants.

Ilanga 1 near Upington, Northern Cape, South Africa, is a 100 MWe thermo-solar plant with 266 loops, built using SENERtrough® parabolic troughs designed and patented by SENER. The plant has a thermal storage capacity of 1 250 MWth, five hours, in the form of a molten salt storage system. Construction started in 2015 and the plant was completed in 2018.