Barloworld Equipment officially unveils its unique new head office and flagship Caterpillar Earthmoving Equipment showroom in Isando on 27 November – in what is a distinctively designed campus of superb functionality, where form and function fuse throughout.

The new development for Barloworld Equipment consists of a head office and a world class showroom, housed in a series of elegant curved forms. The new campus, developed in conjunction with Eris Property Group, is currently under construction, with the showroom already completed and the head office completion date scheduled for end November 2019. 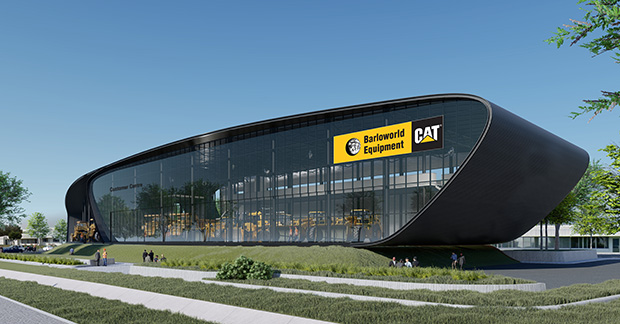 The project was conceptualised as a series of iconic buildings nestled in an indigenous landscape, with the showroom facing the highway for maximum exposure. “The new head office buildings through its forward-looking design will deliver a productive agile working environment dedicated to employee wellbeing ensuring the Barloworld Equipment staff are able to provide exceptional customer performance.” states Emmy Leeka, CEO of Barloworld Equipment.

The head office, comprising of two elongated buildings linked by an enclosed glazed bridge, consolidates all corporate staff into one cohesive team here. Its design also encompasses flush-glazed strip windows, creating a tasteful floor-to-ceiling contemporary look; while the prevalence of glass in both buildings also ensures maximum sunlight, because of their purposeful North-facing orientation. This was mindful of green considerations, in minimising the need for artificial heating and lighting. And both the head office and showroom roof structures were designed to cater for photovoltaic panels.

In 2002, when speaking at the Barloworld centenary celebrations, the late President Nelson Mandela, described the partnership between the Barloworld Equipment and Caterpillar as “the builders of our economy” who helped “create the magnificent road network that connects places and people, to build dams for fresh water and to construct harbours and airports to open up South Africa to the rest of the world.”

It is this ethos of making a collaborative contribution to constructive human endeavour and the imperatives of nation-building, which this highly original head office campus visually represents. The new campus is a fully-functional, three-dimensional embodiment of the spirit of Barloworld Equipment at work – reshaping environments and building nations together – across the African continent and around the world.

Ultimately, the partnership that has provided the earthmoving machinery without which contemporary infrastructure could not exist since 1927, is now truly celebrated in a symbolic construction of its own.

The most immediately noticeable feature of the new Barloworld Equipment showroom structure, is its elongated front-facing bubble profile, inspired by the curved shape of the Caterpillar excavator tread. Not only is this an iconic visual tribute to the legendary earthmoving equipment showcased within, but it also allows this huge machinery to be comfortably exhibited in the voluminous interior space that this design creates.

Couple this with a vast glass façade, which makes the interior exhibit perfectly visible from the busy R24 highway outside, and this becomes far more than a cutting-edge combination of corporate head office and flagship showroom! It is one of the most monumentally attention-grabbing display cabinets ever built – exquisitely exhibiting the mammoth machines that practically build nations, through their role in construction, creation of transport routes and other infrastructure.

Internationally, Barloworld Equipment is the official dealer for Caterpillar Equipment in numerous African countries, as well as operating in Europe and Russia. Here at home in Isando, South Africa, their head office building boasts a number of world-beating firsts. The showroom alone, is a first-of-a-kind in the country dedicated to heavy earthmoving equipment; and is split into two zones – namely “tyre” and “track” product categories – with both open and enclosed areas.

Here, the seamless flow of the building, which authentically mimics the characteristic contours of the equipment on display, makes for easy examination of, and direct interaction with, these vast machines. At the same time, the ubiquitous infusion of the brand aesthetic into all the interiors’ design and signage, creates the effect of complete immersion into the giant world of Barloworld Equipment and Caterpillar.

Of course, such a global showpiece exhibit of gigantic machinery in a seminal showroom, begs the question of how such huge apparatus can easily enter or be extracted from this space. Which is why the building can claim a never-been-done-before international breakthrough; with a staggering 8.8m x 5.5m piece of the prominent glass frontage being fully retractable, via intricate motor-driven automation.

Indeed, the entire head-office and showroom complex is designed with this kind of finely-tuned fusion of form with function in mind. And while not necessarily being created as a green building per se, this too has been taken into account. All the essentials are in place for a 3-Star Green-Star rating, including roofs that are purposefully strengthened to carry a variety of photovoltaic panelling, as well as water consumption and waste management systems.

Leeka says” Ultimately, this beautiful behemoth is living testament to what happens when inspired combinations come together to co-construct the monumental and co-create the iconic. It stands as a definitive symbol, not only of the historic past that Barloworld Equipment and Caterpillar share, but of their future together as bulwarks of development, who can unleash the power to build nations and tangibly transform lives.”

Barloworld Equipment is a Level 1 B-BBEE contributor and a division of Barloworld Limited, a multinational brand distribution company listed on the Johannesburg Stock Exchange.

Barloworld Equipment is the dealer for Cat earthmoving machines and Cat power systems in all its southern African territories – South Africa, Angola, Botswana, Eswatini, Lesotho, Malawi, Mozambique, Namibia and Zambia as well as in the Democratic Republic of Congo’s Katanga Province (in joint venture with Tractafric Equipment) and in Zimbabwe (in joint venture with Zimplow).

Additionally, Barloworld is the Cat dealer for Siberia and the Russian Far East. Other Barloworld Group divisions comprise Barloworld Automotive and Barloworld Logistics.