24 days into his three-month row, South African Zirk Botha who is currently rowing alone from Cape Town to Rio de Janeiro, is now just off St Helena island and is heading west towards Brazil at the latitude of 18 degrees South, longitude 1 degree East. Sponsored by juwi Renewable Energies, Botha is undertaking the extreme challenge in support of the environment and sustainable development. The Trans Atlantic crossing requires him to row completely unassisted for approximately 90-100 days, over approximately 7000km (3800 Nautical Miles) in difficult weather and sea conditions. He has completed approximately 2500km (1350 Nautical Miles) of his journey over the past weeks and is about to cross the Greenwich meridian line. As his row is a nonstop, unsupported challenge, he will not stop at St Helena Island. 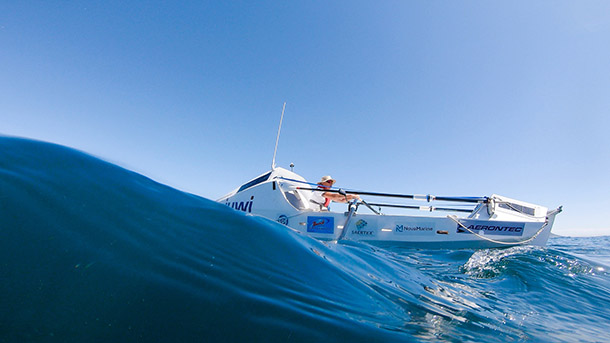 Botha says he did a great deal of research in planning his route for #Row2Rio2020: “Finding a  weather windowand considering the wind direction was key - The answer was to be found in historical maritime practice, going back as far as Da Gama and Dias who used the trade winds to their benefit. More recently, the same route and timing has been used by the Cape to Rio yacht race. I had one variance in that I needed to start early December owing to my slower speed, compared to a yacht.”

Botha has already had to deal with extreme weather conditions and the challenge of crossing busy shipping lanes. “Winds in excess of 30knots and swells of 4 metres forced me to secure myself at some points in my watertight cabin, with safety harnesses in the event of the boat rolling over.”

“However, my boat Ratel has handled challenging weather conditions superbly, and even better is that I am currently a week ahead of my originally anticipated schedule. I can't predict stern seas all the way, but should the current status prevail I will in all likelihood complete the row well ahead of the originally anticipated 100 days.”

Botha is following what is known as the Great Circle Route. “It’s not a direct route from Cape Town to Rio; I first headed out of Cape Town in a North West direction to benefit from the prevailing South Easterly wind. Now, after over 1350nm, I am more than 650nm off the Namibian coast and nearing St Helena.  I have turned westand hopefully will enjoy the benefit of the trade winds behind me as I cross the Atlantic. I have about 2300nm to reach the Brazilian coast, where I will turn South towards Rio.

“On the Brazilian side of the ocean, the wind is predominantly North Easterly, so I have to arrive on the coast North of Rio to have the wind behind me to head into Cabo Frio, where the old Rio de Janeiro yacht club is, which is where I will be finishing.”

“The design of my boat has been crucial - Phil Morrison, an esteemed Naval architect had new plans for a closed cell foam Open Class design ocean rowing boat available. This design would be well suited to the prevailing weather I anticipated, provided there were no seasonal anomalies as the Open Class design is not suitable for rowing into headwinds of above 10knots.I decided, based on historic weather data, that the Open Class would be a good choice.”

The current norm is for ocean rowing boats to be built from marine plywood or in a fibreglass and epoxy mould. Ratel differs from this in that she is built based on a design by Phil Morrison using closed cell foam laid up with fibre glass and epoxy resin.

The specific design incorporates honey comb construction principles which ultimately makes it very strong when considering it is super light. “Before I started fitting hatches and equipment I could lift and turn Ratel by myself with one end on the cradle. With all equipment, spares and food loaded, she weighs maximum 550kgs. With a length of 6.5m and beam of 1.62m she is super light.”

To operate his systems Botha has to have 2 x 12V batteries connected in parallel with a combined 200aH capacity. These are deep cycle batteries suited for charging with solar panels. “I chose Solbian flexible solar panels because of their good track record on yachts and boats. With a peak capacity of 276 watts at 46 volts, they deliver maximum half of that owing to be positioned at various angles to cater for morning, midday and afternoon sun. They have consistently delivered even on overcast days and as such my batteries have been fully charged every day at sunset.”

Fitted onboard Ratel is a desalinator that provides all of Botha’s fresh water. “The Eco Systems Splash unit can make 16l of fresh water per hour. It runs of 12 volts and requires a 16amp supply. Besides the desalinator my most important unit is my VHF radio equipped with a GPS, AIS and DSC facility. The AIS allows me to get early warning of ships in my vicinity whilst the DSC allows me to communicate with them similar to as by SMS. I am also able to call ships on normal maritime channels.”

Ratel is fitted with 3 electric bilge pumps and a manual hand bilge pump in the unlikely event of a flood.

“I also have a tiller pilot, but have not used it since departing from Cape Town. Other minor systems includes cabin and external lights as well as navigation lights.

“To charge my satellite phones I have installed various connection  points that allows for USB or connection by lighter socket. I have a limited 220 V requirement which is powered through an inverter. My total daily power consumption is 115aH, excluding the tiller pilot which I considered a nice to have. The onboard solar system is capable of delivering double the requirement. My power allocation is managed by a Victron BlueSolar charge controller.”

With maritime safety considerations paramount, Ratel is designed and constructed like a life boat so that, should she roll over, she will self-right. “During the extreme weather that I experienced over New Year, she has proven to be very sea worthy. At no stage did I fear that she would roll over.

“It is thus difficult to give a breakdown of the cost of the boat and components on an itemized basis, suffice to say that the project budget is close to R500 000. I am fortunate to have the support of sponsors. juwi Renewable Energies is my primary sponsor, and I’ve been assisted  with materials and equipment by Novamarine, Aerontech, Saertex, Bulwark, FleetMon and BondiBlu. Plus, Genesis Nutrition and Spar will be supplying me with food,” says Botha. “All the parts and components that make up Ratel have been sponsored,including a four-person compact Nova Marine life raft, a life vest, EPIRB and Parachute anchors.”

Botha is rowing unsupported in that no boat is tracking him.“I do however have an excellent Shore Support Team, without whom the crossing would not be possible. I am in daily contact with myteam who consist ofa Team Manager, Rowing Technical Advisor, Weather Man, Weather Router a Weather Analyst and a Media Manager. Each one plays a significant role.”

59 year-old Botha served 17 years in the South African Navy, as a Naval Combat Officer and Combat Diver. During his time in the Navy, he completed three Atlantic crossings. He is also a qualified 200T Yacht Captain (Master of Yachts) and has sailed extensively.

Botha is an avid adventure racer, competing in many multi-day non-stop events that comprised trail running, rock climbing, river rafting and mountain biking. His many adventures include trekking the Himalayas, and stand-up paddle boarding through the Okavango Delta, of Botswana.

Rowing for a sustainable future

Botha has dedicated his row towards raising awareness about the need for sustainable development. “I want to use the challenge to spotlight the impact of fossil fuels and irresponsible consumerism on the planet which will be the future home of our children and future generations. Renewable energies are essential to a sustainable future,” says Botha, who also works at juwi Renewable Energies.

“For my row I will be 100% self-sustaining for over three months. This provides a perfect showcase to support the message that 100% renewable energy is the solution. I will be totally reliant on solar panels and solar-charged batteries as the source of electricity for my water maker (desalinator), auto-pilot, safety equipment, radio and satellite communications equipment.”

“My job equips me to speak with knowledge regarding the competitive costs and benefits of renewable energy. The platform that the ocean crossing creates will allow me to drive home the message that the increased uptake of renewable energy is a key solution to the climate change challenges faced by our planet.”