DetNet’s BlastWeb system has been installed in the mock mining operation on the Wits West Campus, and promises to boost both research capacity and learning at the university. DetNet is an industry partner in the WMI’s Sibanye-Stillwater Digital Mining Laboratory (DigiMine). According to WMI director Professor Fred Cawood, the system will be a vital resource for Masters and PhD students in mining engineering. 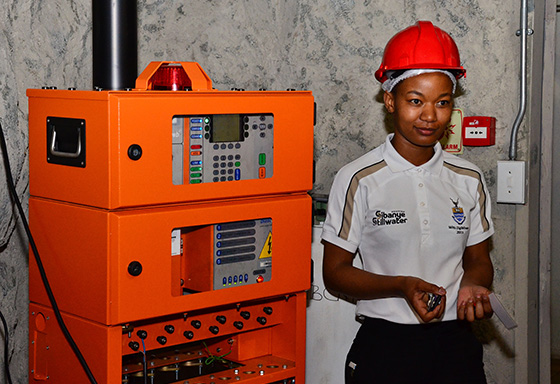 “Blasting and explosives is a very specialised field, and BlastWeb will allow researchers to do a range of tests using the system,” says Professor Cawood. Key research areas that will benefit include: the relationship between blasting and seismicity; optimal rock fracturing using explosives; and safe, controlled blasting practices. He said that access to the system gave Wits a significant resource in helping the industry realise its goal of zero harm.

“Electronic blasting from a control room puts distance between mine workers and risk,” he says. “The system also has a powerful analytics element, so workers can ‘inspect’ the quality of the blast from the control room.”

Professor Cuthbert Musingwini, Head of the School of Mining Engineering at Wits, highlights the teaching value of the donated equipment. “The installation of DetNet’s BlastWeb system as part of the WMI facilities is a welcome development for the Wits School of Mining Engineering,” says Professor Musingwini. “It will provide our students with access and good visual exposure to the concept of smart electronic blasting techniques.”

According to DetNet CEO Gys Landman, the company is committed to future research on digital and autonomous mining technologies. “For this reason, DetNet welcomed the invitation from the WMI to contribute to the further expansion of the Sibanye-Stillwater DigiMine,” says Landman. “The DigiMine initiative creates an opportunity for DetNet to form a research partnership with WMI – to support further post-graduate research into the use of digital technologies in future underground mining.”

Worth around R100 000, BlastWeb comprises a Blasting Control Unit (BCU), a terminator connecting the BCU to the detonators on the development end, and a tagger which assigns unique locations to the detonators. The BCU has been installed along the crosscut of the mock tunnel at Wits, with 43 dummy detonators connected to the development end. The system’s hardware and software are installed in the Wits Mining Institute’s DigiMine control room, providing the analytics from each simulated blast. Communication between the BCU and the control room is carried by the Wits ethernet.

Landman notes that BlastWeb was one of the industry’s leading digital blasting systems, and was successfully used in global underground mines. “We also see additional value in exposing undergraduate students to electronic blasting systems and the use of digital technologies in these applications,” he says. “As they enter their careers, current undergraduates will face a mining environment that increasingly embraces digital technologies.”