In 2019, Natal Portland Cement (NPC-InterCement) and the Artisan Training Institute celebrated a successful 10-year partnership that has trained more than 1 000 apprentice learners qualifying in the engineering trades in KwaZulu Natal.

To celebrate the one-decade milestone, the two companies held an apprentice awards ceremony on 29 November 2019 for the current cohort of learners enrolled at the training facility near Port Shepstone. Seven learners were recognised for their quality performance. 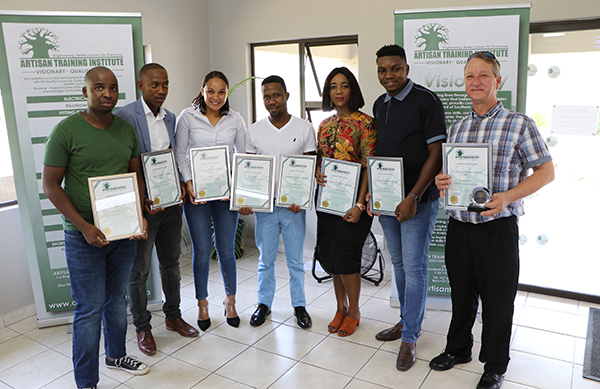 At the awards ceremony, NPC Director, Giovani Lodetti shared an inspiring story about the birth of the training centre which were conceptualised during the planning phase of the Simuma cement plant expansion project in 2005.

“The project included a second kiln line, cement mill, multi storage bulk silo and packing plant. For a major project like this, space was a challenge, and the question was ‘where would we house the contractors?” Lodetti said at the event.

When the project team mapped the layout of the new installation, they made provision for contractors’ accommodation. “We built what we called the contractors village, right here on Battle Hill. We also had a vision to, upon completion of the expansion project, turn the village into something that will continue to contribute to the local economy”.

The rest is history. The Artisan Training Institute’s KwaZulu-Natal training campus opened its doors in January 2020.

Lodetti, who began his career as an artisan himself, says technical training and skills development have changed the lives of many young people in the region. “Training facilities are legacy projects, because knowledge is power. We are delighted that our partnership with ATI has enabled us to achieve this vision.”

According to the facility’s training manager, Niall Mackenzie, it is of utmost importance to recognise apprentices who excel during their development phases. “In addition to providing motivation for their future career paths, it also encourages other leaners to improve their skills, so that they can receive an award in the future.”

NPC HR Manager, Seema Maharaj says it is particularly encouraging to see two women learners excel in electrical- and diesel mechanic training, which historically were known to be male-dominated trades.

According to Sean Jones, ATI’s MD, ATI takes great pride in the facility’s growth and contribution to the KwaZulu-Natal economy over the past ten years and values the strong partnership it has built with NPC.

Both companies remain committed to skills development acknowledging its critical importance within the South African context. This commitment has galvanised plans to ensure the ongoing success of the facility over the long-term.