In quarries when haul roads are in top condition, mining trucks run faster and safer. Meaning that up keeping the internal haul road system has a massive impact on truck haulage cycle efficiency, costs and production. 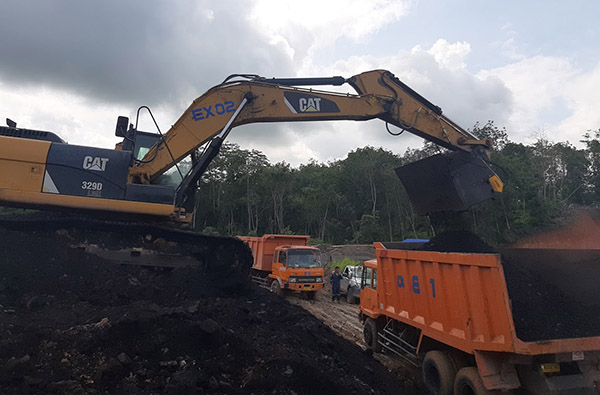 Trucks haulage represents up to 50% of the total operating costs incurred by open mines and quarries. In fact, due to poor internal roads, about 80% of large tyres fail before they wear out, while suspensions break down and the travels through the quarry from extraction to processing stage and vice-versa need to be slowed down, causing a huge loss of revenue for enterprises.

Up keep the road system and keep them clear. In a major Russian coal mine, the simple addition of an MB Crusher unit to their operation has brought in several advantages, including lowering truck operating costs and extending the life span of tyres and suspensions.

After the addition of the MB Crusher, the faster cycle times led to higher productivity and lower cost per tonne.

The MB Crusher bucket BF135.8 fitted on a Hitachi 850 was utilised to crush the overburden laying around to up-keep the internal haulage roads while making sure they were also free from rocks and other stones.

To maintain the internal roads this Russian company has employed just one operator and one machine alone. Because the jaw crusher made by MB Crusher operates by using the excavator hydraulic supply, there is no need for any other personnel rather than the driver.

They also eliminated the need to purchase any extra material. Before they had the MB crusher bucket to fix the roads, they used to buy aggregates from a supplier, load them into the truck, haul them in the mine where the excavator was waiting to shovel the material from the truck to where it was needed. Now the excavator operator alone crushes the overburden along the road. The MB Crusher Bucket BF135.8 is maintaining a safe work environment while maximizing production and lowering operating costs.

From spoil to saving

The MB unit an attachment is designed to work with any brand of heavy equipment. With a capacity of about 1,6 m³ and a total weight of 7,5 t, the machine is resourceful and handy, as it can go along the internal quarry roads and fix any existing potholes within minutes.

Another advantage is that the output is fully adjustable from 40 mm to 150 mm and the size change can be done anywhere. It involves unscrewing some bolts, adding or removing sizing shims and screw back the bolts. No need to take the machine to the workshop.