At the beginning of March, the Department of Mineral Resources (DMR) released the Mine Health and Safety Statistics (statistics) for 2018. The DMR compiles and publishes these statistics annually. 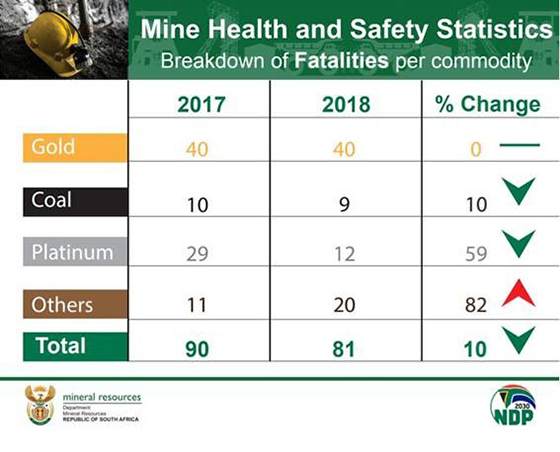 We have analysed the statistics and highlight some important facts together with some interesting insights which we set out below.

The statistics consider the performance of the mining industry from the perspective of health and safety. The statistics include information on the number of fatalities, injuries and occupational diseases reported for the 2018 calendar year.

Overall, the statistics reveal that there has been a slight decrease in fatalities and injuries across mines in South Africa. We provide the actual statistics published by the DMR at the end of this article.

The highlights from the statistics are:

Although there was a decrease in the number of fatalities and injuries at mines, the DMR reiterated that it would continue to engage with its social partners through the Mine Health and Safety Council to ensure a higher degree of safety for mineworkers.

Despite the decrease in number of injuries and fatalities, the National Union of Metalworkers (NUMSA) has called on the DMR to amend the Mine Health and Safety Act 29 of 1996 (MHSA) to guarantee the arrest and criminal prosecution of “mine bosses” following fatalities and injuries in South Africa. Notably, there was no statement of support for the taking of disciplinary action against individual employees who may have contravened safety rules and endangering themselves and fellow employees.

Notwithstanding the potential constitutional concerns regarding legislation guaranteeing arrest and prosecution in the absence of justifiable reasons for such conduct, the calls for this amendment appear to discount or forget that criminal prosecution in the event of a breach of the MHSA and/or negligent causing of a serious injury or illness is already provided for in the MHSA.

Section 91(1) of the MHSA provides that any person who fails to comply with the provisions of the MHSA commits an offence and may be prosecuted. This applies equally to corporate entities, which may be prosecuted in terms of section 332 of the Criminal Procedure Act and the responsible individual. The potential penalties for such offences include imprisonment.

The call for the arrest of “mining bosses” incorrectly assumes that only senior managerial personnel can be criminally prosecuted. Section 86(1) of the MHSA provides that a negligent act or negligent omission of any person, which causes serious injury or serious illness to another is an offence. Any call for increases in criminal prosecution following mining related fatalities must then equally apply to all employees and any employee that may have acted negligently (such as failing to comply with a safety rule on which such an employee had been trained) should lead to swift prosecution).

There is also no need, in our view, to amend the MHSA to ensure that sufficiently serious sentences can be meted out by the courts. The MHSA already contemplate the ability of the courts to withdraw or suspend mining authorisations of an employer and individuals may face charges of culpable homicide or, even, murder in some instances.

NUMSA’s call could be attributed to the low number of criminal prosecutions seen in the mining industry. A number of factors contribute to the lack of appetite by the national prosecuting authority to initiate criminal proceedings for breaches of the MHSA. The factors include the following:

At the release of the statistics, the DMR confirmed that it plays an important role in “monitoring and enforcing compliance with the law”. The DMR also called upon all “social partners to play their part to realise the overarching objective of ensuring that every mineworker returns home unharmed, every single day”.

Health and safety of mineworkers therefore continues to be a common responsibility of all mine owners together with the DMR and other social partners.

Safety at the mines is everybody’s responsibility – companies, workers and government. While there are improvements, we must do more in this area – Dept Minerals RSA (@DMR_SA) March 5, 2019