Celebrating at bauma 2019 its 10 000th production machine since the legendary “4518” has been introduced in 1996, Keestrack consistently develops its worldwide manufacturing capacities. With the official opening of a new 8 740 m² assembly complex, the second extension phase of the company’s main factory in Šternberk, Czech Republic has been completed. Next milestones and new extension projects will be set and started in 2019, including the opening of Keestrack’s Indian assembly in Neemrana and new production capacities in Ponzano Veneto, Italy. 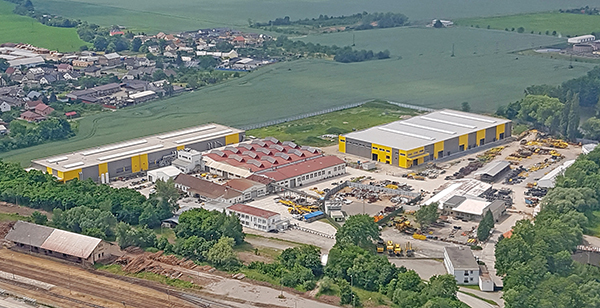 Opened in 2001, Šternberk has been the sole manufacturing site for tracked screeners and crushers of the Belgium-based processing specialist until 2007. Then the Chinese screener assembly in Chuzhou went into operation, in 2010 Keestrack acquired the Italian jaw crusher manufacturing of former OM. Because of continuous growth requirements on Keestrack-CZ were increasing rapidly – today the 5-hectare factory supplies all Keestrack impactors, screens, scalpers and stackers and provides modular machine components for the jaw and cone production at Keestrack-Italy and high quality kit modules for Keestrack’s Asian operations.

In 2014 the group management decided to launch a mid-term development programme to expand the capacities at Šternberk. The first phase, of the planned three steps, was adding a modern 5000 m² factory in 2016 for steel construction, additional to the existing halls (8 000 m²) and this improved raw material logistics remarkably. The second new complex – operational since September 2018 – now completes phase 2 with an additional space of 8 740 m², accommodating parts storage and four separate assembly lines for screeners and crushers.

Both projects, totalling an investment of €6-million since 2015, offer a state-of-the-art working environment at the factory with currently 480 employees. The optimised production processes improve the work-flow and significantly reduce lead times for components and complete plants. As an example, Keestrack now introduced a four-cycle line production process for its medium range of scalpers (K3 – K6) and the new 30-t impactor crusher R3. Compared to the former work cell production, the new process is expected to reduce the manufacturing time by up to 30 %, depending on the type of model.

According to Keestrack management, phase 3 of the factory extension will be initiated in 2019/20, including a new quality control facility, a modern spare part logistics terminal and a state-of-the-art customer centre. Parallel to the floor space extension Keestrack-CZ will also implement a new powder coating line, remarkably increasing production capacities and considering larger workpiece dimensions for the coming heavier Keestrack models.

Keestrack has also announced an important investment at its Italian operation in Treviso, Ponzano Veneto. Within the group’s integrated manufacturing and distribution concept with decentralized international technology competence centres, the 2,4-hectare operation supplies the complete series of jaw crushers and the growing range of tracked cones. This way contributing importantly to the expanding Keestrack “Heavy range” with powerful track-mobile processing systems for quarrying and mining operation, the existing 5000 m² production of Keestrack-Italy will at least be doubled by the planned factory extension to be finalized in 2020.

Production of the group’s Indian branch Etrack Crushers will start in May/June 2019 at the brand-new assembly with the first machines leaving the 10 000 m²-facility in Neemrana, around 100 km south of New Delhi, in August. The production programme initially includes the full hybrid crushing plants Keestrack B4e (jaw) and H4e (cone), identified to meet the demands of Indian contractors in terms of productivity, transport and on-site mobility. Etrack’s assembly is flexible, based on core OEM modules (crushers, frames, chassis, etc.) delivered from the group’s European factories and components of international technology partners (engines, drives, etc.) or local suppliers.