As NASA’s Mars Perseverance rover began exploring its new planetary home after landing on 18 February 2021, it’s operating with the world’s most advanced technology while being equipped with Ty-Rap™ cable ties from ABB, the same ties that are widely used on earth. 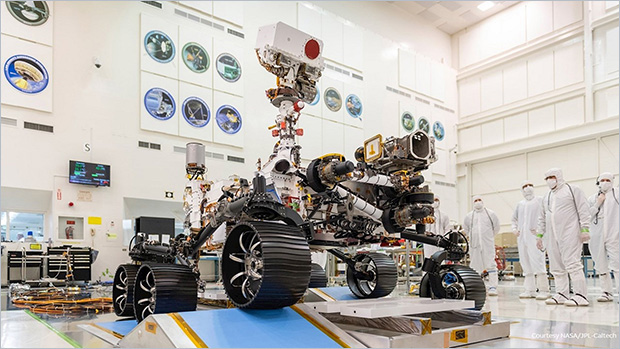 Found in buildings, subways, the deepest oceans and outer space, ABB’s Ty-Rap cable ties are designed to withstand the demands of space flight and resist corrosion and radiation in the most extreme environments. NASA has integrated the same Ty-Rap cable ties, which are used in commercial applications worldwide, to fasten the rover’s interior and exterior conduit and components and to secure research and lab equipment.

“Similar to how standard cable ties are a practical solution for use around the home to organise everything from indoor cords to outdoor lights, high-performance Ty-Rap cable ties connect and secure the rover’s wires and equipment,” said Matthias Heilmann, President of ABB Installation Products. “For nearly 50 years, these Ty-Rap cable ties have performed in the most intense conditions on earth and protected components from high impact elements and radical temperature changes in previous space expeditions.”

The business known today as ABB Installation Products has provided products to the space program since 1973, and Ty-Rap cable ties are in continued use on the still active NASA Curiosity rover and were previously used on the twin Spirit and Opportunity rovers. Originally patented in 1958, standard Ty-Rap cable ties became known for their Grip of Steel locking device in business and household use. Since then, nearly 30 billion Ty-Rap cable ties have been produced – laid end-to-end, enough to stretch to the Moon and back more than a dozen times.

The Mars 2020 Perseverance Rover mission is part of NASA’s Mars Exploration Program, a long-term effort of robotic exploration of the Red Planet. The mission addresses high-priority science goals for Mars exploration, including key questions about the potential for life on Mars.

ABB has a long-standing relationship with NASA that began more than 30 years ago with optical sensor contributions to support experiments on the space shuttle. In November 2020, the company announced a contract for NASA’s Jet Propulsion Laboratory that will see key technology from ABB and its partner Nüvü Camēras fly onboard the space telescope in 2025, on course to capture the first spaceborne images of planets outside our solar system. ABB is also a key supplier to the JPSS U.S. weather satellite series under NASA procurement. These weather satellites are critical pieces of hardware for operational or flagship U.S. space missions.

Part of its Electrification business area, ABB Installation Products Division, formerly Thomas & Betts, is a global leader in the design, manufacture and marketing of products used to manage the connection, protection and distribution of electrical power in industrial, construction and utility applications. With more than 200 000 products under more than 38 premium brand names, ABB Installation Products solutions can be found wherever electricity is used.

ABB is a technology leader that is driving the digital transformation of industries. With a history of innovation spanning more than 130 years, ABB has four customer-focused, globally leading businesses: Electrification, Industrial Automation, Motion, and Robotics & Discrete Automation, supported by the ABB Ability™ digital platform. ABB operates in more than 100 countries with about 144 000 employees.