“This latest round of drill results has identified a new gold structure over 1500 m in length, representing a continuation of Zone B North,” says Bert Monro, CEO of Cora Gold. “This is particularly encouraging given that the shallow drilling undertaken is only designed to provide a guide to the location of the structures. This has similarities to early results from Selin before deeper holes were drilled, and a maiden resource was declared. Additionally, a further 500 m of strike to the west of Zone C was also identified as a new mineralised zone. I look forward to releasing the remaining results from this programme once they are received.” 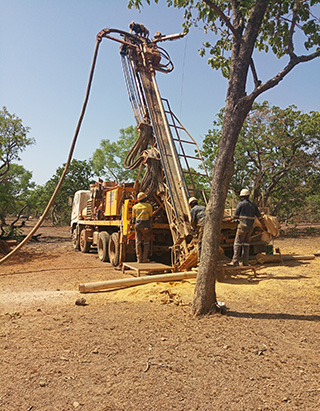 Cora Gold’s reconnaissance exploration drilling programme was primarily focused on a 1 500 m extension of the Sanankoro structure and associated splay structure, representing the continuation along strike of Zone B North. This was the first drill testing of the surface target which had been delineated by a combination of historic soil geochemistry and Cora Gold instigated semi quantitative termite sampling supported by ground mapping. The drill fences were set between 300 and 320 m apart as dictated by ground conditions, and typically cross the pronounced resistivity and induced polarisation (“IP”) anomaly that extends to the north, away from the Zone B North gold mineralised zone.

The work commenced with a shallow (20 – 26 m) rotary air blast (RAB) programme undertaken by the in-house mobile RAB rig, prior to selective follow-up with short air core (AC) holes. In most cases, gold mineralisation was intersected between surface and about 30 m vertical depth in the zone where gold mobilisation by ground water can be prevalent. This provides a very good indication of the presence of primary gold structures but, as yet, is non-definitive in regard to potential widths and grades. In addition, for ease of the programme, drilling mainly used a westerly azimuth rather than the regular north-west azimuth, which has the potential to intercept both the northerly and easterly quartz structures. Nonetheless, the recorded widths of gold mineralisation bodes well for future follow-up drilling.

The drilling programme also provided evidence in the south of the permit for a brand-new mineralised zone, currently over about 500 m of strike to the west of Zone C.

Samples were collected selectively from the RAB drilling on the basis of observed visible gold panned from each meter at the rig side. Samples were combined into 3 m composites for analysis by 50 gramme fire assay at the independent SGS laboratory in Bamako. Each AC and reverse circulation (RC) sample was also panned for visible gold at the rig side, and then either combined into 3 m composite samples or despatched as individual 1 m samples, depending on the panning results. As for the RAB samples, the AC and RC samples were analysed for gold using 50 gramme fire assay at the SGS laboratory in Bamako. AC and RC samples were subject to the standard quality assurance/quality control (QAQC) checks with blanks, duplicates and certified reference material inserted on a 5% basis.

Dr Jonathan Forster has sufficient experience relevant to the style of mineralisation and type of deposit under consideration, and to the activity which he is undertaking to qualify as a Competent Person in accordance with the guidance note for Mining, Oil & Gas Companies issued by the London Stock Exchange in respect of AIM Companies, which outlines standards of disclosure for mineral projects. Dr Forster consents to the inclusion in this announcement of the matters based on his information in the form and context in which it appears.