Firestone Diamonds has provided its quarterly update on operations at its Liqhobong Diamond Mine for the quarter ended 31 December 2019, highlighting the devastating effect power disruptions had on operations. 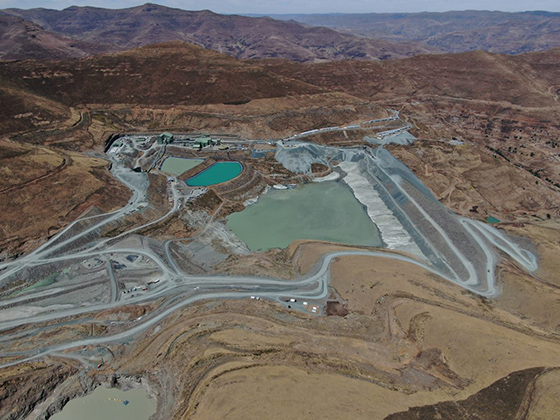 As announced previously, power supply to the mine was disrupted on 1 October, causing the processing plant to be shut down until 26 October when alternative electricity supply was provided by diesel generators sourced from South Africa. During this time, no ore could be treated.

From 27 October, the mine ran on generator power, albeit at a marginally lower capacity of approximately 90% until 1 December, when the grid power was restored and operations returned to normal.

The power disruption impacted operations, resulting in approximately 230 000 fewer ore tonnes being treated for the quarter and, therefore, fewer carat recoveries which translated into lower revenue.

Operating costs for the quarter were $1,1-million higher as they included the additional costs associated with renting and operating the diesel generators. The total impact of the power disruption to the business is estimated to be $4,6-million.

Due to the power disruption and a subsequent review of the mine plan, the production guidance for FY2020 has been revised as follows:

Paul Bosma, Chief Executive Officer, comments: “The unexpected power disruption had a devastating impact on production and revenue generation. The team however, did well to salvage the situation by procuring and installing generators from South Africa in record time to allow for operations to recommence.

As a result of the power disruption, we have reduced our guidance for the year in respect of diamond recoveries and ore tonnes treated.

During the quarter, good progress was made with our Lenders and non-binding term sheets were signed before year end with ABSA bank for a debt repayment standstill until 31 March 2021 and with our bondholders for a working capital facility of US$6 million for the same period. We expect both of these agreements to be formally documented before our financial year-end. Due to the production setback and continued lacklustre market conditions, the Board has decided that it is imperative that it does all it can to reduce costs in order to survive the prolonged downturn. As announced earlier today, this includes delisting from AIM and reducing the size of the Board.”

During the quarter ended 31 December 2019, Liqhobong treated only 668 120 tonnes of ore compared to its plan of approximately 900 000 tonnes due to an unexpected power disruption. The power disruption prevented any ore from being treated from 1 October until 27 October, when alternative power provided by rented diesel generators made it possible to recommence treating ore at a marginally lower throughput rate of approximately 90%. From 1 December, operations returned to normal and capacity returned to 100% as grid power was restored. The lower tonnage treated resulted in fewer carats recovered for the quarter of 138 000 carats (Q1: 201 091 carats).

Mining continued in predominantly the higher-grade southern part of the pit during the quarter in order to further excavate the sump that is planned to be used to store water during 2020. The recovered grade of 21 cpht was unchanged from the previous quarter and continued to be lower than the expected reserve grade. Work to improve the situation is continuing.

A total of 1 070 854 waste tonnes was moved during the quarter which was less than the 1 379 758 tonnes that was moved in the previous quarter. The waste mining plan was reduced due to a steepening of the cut 2 south design and the guidance has been updated accordingly.

The first quarter was worked safely with no lost time injuries recorded.

The total additional cost associated with renting and operating the diesel generators during the quarter was US$1,1-million with the total cash impact due to the power disruption estimated at US$4,6-million. However, Liqhobong’s insurer has surprisingly repudiated the claim relating to the power disruption and management is now considering its options in this regard. The cash balance at the end of the quarter was US$17-million (Q1: US$21,8-million).

The prices realised for the smaller goods that make up the bulk of our production by volume, remain subdued, impacted by a build-up of rough and polished inventory in the midstream. Initial indications are that the peak retail season at the end of the 2019 was satisfactory and it is therefore anticipated that some restocking should take place during early 2020.

However, due to the excess inventory held in the midstream and by the two largest producers, we expect that it will take some time for the value chain to rebalance and for there to be a sustained increase in prices. Other downside risks include ongoing US-China trade tensions and, more recently, the uncertain impact of the coronavirus on demand.