On the Cover: In the face of a tough aggregates market and a very competitive market landscape in its vicinity, Afrimat’s Kliprug Quarry continues to buck the trend with a steady growth that has seen the operation achieving record volumes in May this year.

Despite the tough nature of the construction industry in South Africa, compounded by the lack of meaningful government projects, Kliprug continues on a sustainable growth path. Since its inception, the operation has seen remarkable, continued sales growth. This is despite available figures indicating that government’s infrastructure budget has been shrinking during the past five years.

The downward trend in the construction sector has worsened, particularly in the past two years. Industry figures show that government’s infrastructure budget has deteriorated from R947,2-billion during the 2017/18 budget, to R834,1-billion in 2018/19, representing a massive 12% nominal decrease. Against this negative background, Kliprug’s sales of aggregates have steadily increased to reach record volumes in May this year. The quarry has also increased its market reach, allowing it to service all sectors of the market.

Of note is the fact that the young quarry is situated in a very competitive market area with four other well-established quarries within a 5 km radius. According to Bevin Cornelius, key account manager for Aggregates Western Cape, Kliprug is the only quarry of the five that doesn’t have either an asphalt plant or readymix/precast concrete operation on site.

In quest of screening efficiency

With a wide range of screen choices available in the market, it is important to deploy the right one for the right application. With quality parameters in screening aggregates normally based on size and shape, how does the end product influence the type of screen you need? 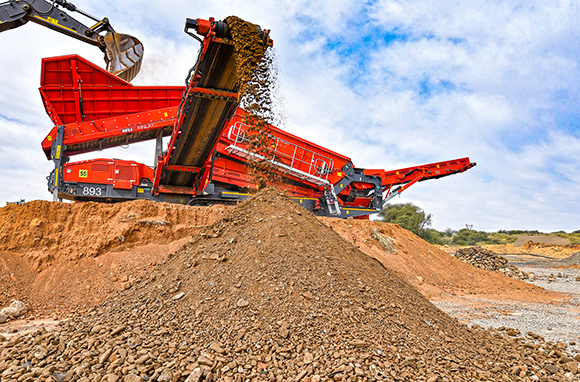 In this feature, a panel of experts further helps us look at the types of screens available in their respective stables and what applications best suit each of the screens. We further look at how final product requirements determine the type of screen you need, especially given the fact that screening quality in aggregate production is mainly driven by size and shape.

The first considerations would be the size of the feed and the product size that is required. “We have different horses for different courses, so is a scalper, primary or secondary screen required? Often you will require a combination of the two – a scalper upfront to carry out the general separation, followed by a screen to make the fine cuts,” says head of sales for Africa at Pilot Crushtec International.

Abelho adds that, with some exceptions, the screening media will have a larger effect than the type of screen when one is targeting the size and shape of a product. “If the size requirements are very stringent with a very narrow tolerance for deviation, then a horizontal screen would typically provide a much more accurate cut (separation) than an inclined screen. For fine screening where open area is a challenge, dependent on the final specifications, screening below 3 mm is often performed with the general-purpose inclined screen using media such as piano wire, but operational considerations, such as a very abrasive feed, may make this uneconomical and a linear screen with poly-panels may be advisable,” says Abelho.

A major plant upgrade and investments in new technologies are driving new levels of efficiency at SPH Kundalila’s Cape Town-based Bridgetown Dolomite Mine. 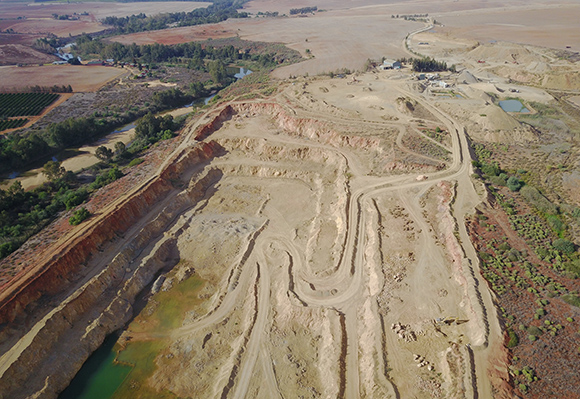 The current business climate in the aggregates industry is characterised by price volatility, shrinking margins and increasing operational costs, among several other challenges that relate to legislative requirements. This is exacerbated by a steady decline in the growth of aggregates demand due to the lack of meaningful construction projects in South Africa.

To survive and mine profitably during such a low growth cycle, quarry owners need to capitalise on the opportunity to improve their productivity and focus on one factor they can control: efficiency. Operational efficiency cannot be achieved by focusing on a single operational process, but paying attention to the production process as a whole, all the way from blasting and drilling, load and haul, to crushing and screening. Adopting new technologies can also set new levels of operational efficiency at quarry sites.

With that in mind, efficiency is sought in every sense of the word at SPH Kundalila’s Bridgetown Dolomite Mine. The Cape Town-based quarry mainly produces metallurgical dolomite for Saldanha Steel, as well as agricultural lime and construction aggregates. Several interventions, including a recent plant upgrade and the adoption of three major technologies – a drone system, an innovative dust suppression system and real-time belt weighing scales – have ushered in new levels of efficiency.