A unique community-based water supply scheme has brought a reliable supply of water to the community of Habu, in north-west Botswana, even in the prevailing drought in the country. 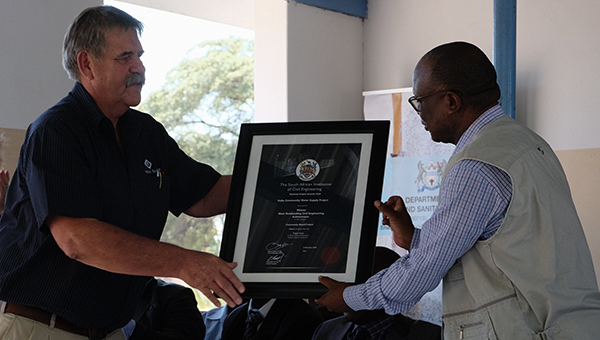 Framed copies of the award certificate were presented to Mr. Keemisetswe Khootla, the Assistant Chief and Headman of Arbitration in Habu; and to Dr Obakeng.

The Botswana Ministry of Land Management, Water and Sanitation Services hosted an event on 20th March to celebrate the formal handover to the Government of Botswana, of the Habu Community Water Supply infrastructure.  The scheme, which has been successfully managed by the community for two years, has provided a reference for the roll-out of more water-security measures in other areas of Botswana.

Ms Bogadi Mathangwane, Director of the Department of Water Affairs said that the stellar performance of the scheme since its completion in 2016 had provided the Botswana authorities with ample evidence that they now have a potential blueprint for community-managed water supply schemes in rural areas.

Held at a Kogtla in Habu village, the event was also attended by Dr. Obolokile Obakeng, Permanent Secretary of the Ministry of Land Management, Water and Sanitation Services; and representatives of the Water Utilities Corporation (WUC).

Tompkins, a Water, Sanitation and Health (WASH) development expert, led the JG Afrika team that was appointed by Initiatives to assist in the design and development of this first-of-a-kind water-supply project for the larger Habu community on behalf of the Paul G Allen Family Foundation’s Philanthropy programme.

Meanwhile, Franklin Electric was contracted by JG Afrika to install the borehole pumps and Franklin Wells for the World Foundation donated borehole infrastructure, in addition to that supplied by the Paul G Allen Family Foundation, which allowed the project team to install two boreholes.  The two boreholes provide more than ample water supply to this large community comprising about 1 500 people.

In her address, Ms Bogadi Mathangwane said:  “When Robyn initially presented this concept to me in 2015, I wondered if it could be done, because we had tried this model in other communities and it hadn’t worked. However, she presented a clear roadmap of how they could work; and today, I see it has.”

The unit costs associated with operating and maintaining water schemes in these extremely remote locations is high.

Before JG Afrika completed the water scheme, members of the Habu community did not have a reliable supply of water for up to three years.

A cornerstone of the success of the water scheme in Habu is the significant attention that was given to the social aspects, which actually took the lead on this project and ensured the necessary community buy-in.

In addition to involving the community in the project right from the outset, JG Afrika developed a robust governance framework for the scheme and a toolkit to train representatives of the dedicated water-user committee, comprising two caretakers and five water monitors. These members of the community also underwent technical training in the basic maintenance of the infrastructure at installation.

Community members pay for their consumption by registering with a water association and then present a stamped token to the monitors who open the taps at 9:00 am and lock them at 6:00 pm.

A simple water-supply scheme was developed that can be easily operated and maintained by trained members of the community.

It consists of five tanks on stands that supply taps located at a central point for each of Habu’s five wards, while the pumps are powered by solar energy with manual switches.

A manual system is easy to operate and ensures that community caretakers are in constant contact with the system, while their daily walk along the pipe servitude to the pump switching station allows them to detect any concerns that they are able to report timeously to the water committee.

Basic switchgear can also be maintained and repaired without having to rely on highly-skilled technicians that are mainly only located in Botswana’s major commercial centres, thus decreasing the overall unit costs of the infrastructure.

Tompkins points to a number of steps taken by the Botswana government that support the wider introduction of this approach to water delivery in rural settlements.

“The Integrated Water Resources Management & Water Efficiency Plan, which identifies water-user associations and committees as a feasible solution to the challenges that have hindered attempts to ensure water-security in these areas, was developed by the Botswana Government in 2013. Meanwhile, the country’s authorities are also in the process of

developing a water-catchment model in which water-user associations and committees are an important sub-component of the management of the country’s water resources,” she says.

Moreover, the World Bank approved a US$145,5-million loan to the Botswana government in 2017 to improve water availability in drought-vulnerable areas, many of which are in rural areas of the country.

Notably, part of this loan will be used to fund the augmentation or rehabilitation of existing water schemes in select areas of Botswana, and it is possible that the new model could be incorporated into this component of the project that is expected to benefit over 450 000 people in the country.

The fund will also be used to implement measures to interlink, protect and secure surface and groundwater resources.

This is in addition to strengthening institutional capacity at a ground level to improve the efficiency of services and sustainability of the country’s water resources.

Meanwhile, Tompkins is planning to host a workshop for representatives of the WUC and the Department of Water and Sanitation, the latter now being the owner of the Habu scheme, to fine-tune the service delivery model.

Important experiences could also be drawn from the successful community-based water-supply schemes in the neighbouring Kavango and Zambezi regions in Namibia, where community managed water supply is a national policy.

The Namibian model initially helped influence and shape the Habu project model, which was adapted for the Botswana context by JG Afrika.

She also sees immense potential to incorporate information and communications technologies that have been used successfully in other African countries and elsewhere in the world into the programme to bolster monitoring and evaluation of these water-supply projects.

Community management of the scheme can significantly improve monitoring and evaluation, which will help identify weaknesses timeously, improve repair turnaround times and identify best-practices that could be implemented in other areas.

At the event, Jonker again expressed his unwavering commitment to this water scheme as one of Franklin Wells for the World Foundation’s showcase projects.

He also lauded JG Afrika for its stellar performance in Habu and congratulated the firm for the award it received for outstanding engineering in a community-based project at the South African Institution of Civil Engineering annual awards in 2018.

Framed copies of the award certificate were presented to Mr. Keemisetswe Khootla, the Assistant Chief and Headman of Arbitration in Habu; and to Dr Obakeng, because it was very much a team effort; which harmonised Social, Political and Technical aspects, to bring home this milestone project.

Exploration success for Perseus in Ghana

FAW Trucks commits to vision and objectives of...

The role of wind power in the SA...