Before the introduction of hi-tech electronic equipment such as computers, hi-fi systems, microwave ovens, televisions, etc. electrical surges were not considered a major problem. These hi-tech items require a stable power supply as they are very sensitive to fluctuations in electrical voltage and current. A power surge or transient voltage is a spike or increase in the normal voltage that the equipment is designed to operate at. 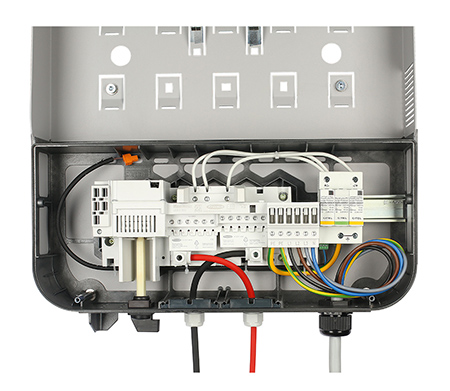 A simple explanation for this phenomenon is that if, in a normal household, the water pressure in the pipes were to increase significantly, the geyser would probably burst, In the same way, when electrical equipment sees a power surge, the electronic components ‘burst’. The surge protectors act as pressure relief valves in the electrical system. Because of the vulnerability of this hi-tech equipment, some insurance companies are refusing to give insurance cover to equipment that has been damaged by lightning and/or voltage surges. It is now imperative to install surge protection devices (SPDs). The most dangerous surges are those caused by direct lightning strikes to a building and can be calculated using the method specified by SABS.

This risk increases if the building is located in an exposed position, such as on the side of a hill. Surges because of network switching and adjacent lightning strikes are usually the least dangerous but occur most frequently. There are three main categories of SPDs: current-diverting (Class I) and voltage clamping (Class II and Class III). Class I SPDs (10/350) lightning current arresters can divert large surge currents such as direct lightning strikes, but must be used in conjunction with Class II SPDs. Whenever a building has external lightning protection such as a mast or conductors on the building, Class I SPDs must be installed. Class II SPDs (8/20) surge arresters can survive lower amplitude surges in areas where direct lightning strikes are not expected and must be installed in main distribution boards as a minimum requirement according to the regulations in SANS 10142-1.

Although this regulation requires that the SPDs withstand a nominal surge current of 5 kA and a peak surge current of 10 kA it is recommended that higher rated SPDs be installed, say nominal surge current of 10 kA, and 25 kA peak surge current. Class III SPDs (8/20) surge arresters are installed to dissipate any surges that are induced between the electrical distribution board and the equipment to be protected. These Class III SPDs must always be used in conjunction with Class II SPDs. If the Class III SPD does not have an internal disconnecting mechanism, the circuit that it is used on must also be supervised by an earth leakage device. The figures in brackets (8/20) next to the SPD Class represent the response time in microseconds (μs). The first figure is the time that the SPD takes to ramp up to the maximum nominal discharge current. In this case, if the SPD had a nominal discharge current of 10 kA it would take 8 μs to ramp up 10 kA and then 20 μs to decay to 50 % of 10 kA (5 kA). From this it can be seen that when a Class I SPD with a ramp up and down figure of 10/350 is used although being able to handle a higher current it is much slower in doing so, which is why a Class II SPD needs to be used in conjunction with it to make the residual voltage low enough to safeguard the installed electrical devices.

There are SPDs on the market that combine Class I and II characteristics. Class III SPDs would normally be installed in individual circuits as close as possible to the item of equipment that is being protected and are available as individual plugin units and extenders (surge protector power strip). Many SPDs have flag or LED indications to show that the unit is healthy or ‘blown’, and these types should be used wherever possible. It is also worth noting that surges can be experienced on incoming telephone lines, data lines and antennas and that special SPDs are available for these applications.