When Carl Kleynhans was appointed as General Manager at Phoenix Contact in November last year, it gave Sparks Electrical News the ideal opportunity to catch up with him and find out what he has been doing since he was Personality of the Month in 2011. 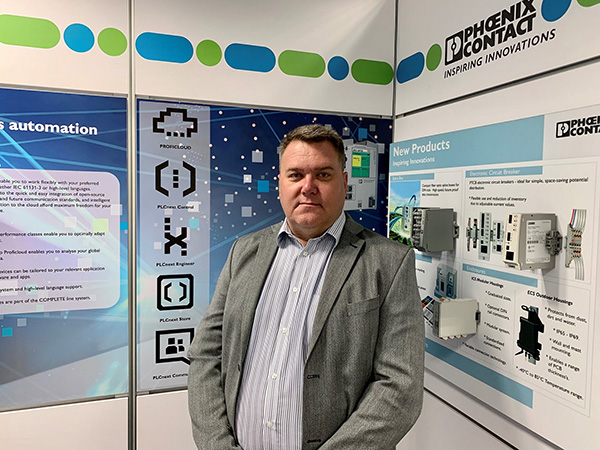 SPARKS: What have you been up to since we spoke to you in 2011 as country president for Schneider Electric South Africa?

CK: I left Schneider in around 2013 and took time off for a ‘sabbatical’, for lack of a better word, after 15 years of corporate life. I went on a couple of motorcycle tours around Southern Africa on my BMW GS 1200 and up the Californian coastline on a Harley Davidson, and then I started consulting. I looked at a couple of businesses with the idea of possibly getting involved; assisted a number of friends in small to medium enterprises; and I ended up in Mozambique where I worked for close on a year, commuting Monday to Friday, heading up the development of an industrial business park. I returned to South Africa and back into the corporate environment. I was introduced, via my neighbour, to Pinnacle IT and accepted a position there heading up three divisions. I was there for almost two years and was really happy and enjoyed the work. I was then approached by a head-hunter on behalf of Phoenix Contact and it ticked all my boxes –Phoenix Contact has been represented in South Africa for 50 years, and is now a wholly owned German subsidiary however we are a Global player with numerous manufacturing facilities and sales companies throughout the world.

SPARKS: What is your current position?

CK: I am General Manager for the South African entity and custodian of the local legal entity, which also looks after Sub-Saharan Africa. One of the things I like about working at Phoenix Contact is that we are independent; the Phoenix Contact philosophy is that it likes local people to run local teams. I’m looking forward to the challenge. Once again, it means a new environment, new people, new ideas, and learning a niche space within the automation and electrical arena. I’ve always been a collaborative leader; I’m engaged and I like to roll up my sleeves, be involved and be in front of customers. I also like to develop people and see young people grow.

SPARKS: What changes have you noticed in the industry since you’ve returned?

SPARKS: What would your advice be to electrical contractors and electrical engineers coming into this new world?

CK: Nobody knows a vendor’s offer better than the vendor, so I would say, utilise the vendors, especially those that have been around and have a vested interest in the country. Phoenix Contact is a specialist in its field, so make sure you use us to keep yourself up to date with the latest trends, technology and solutions available, and work closely with the reputable companies, because they really are at the forefront of research and development. It is more important now than ever to stay up-to-date with changing trends. Convergence has become a big factor. Look at structured cabling, for example, with LED lighting we don’t have to use electrical cables, we can use CAT XI A cables to wire LEDs. All of a sudden the electrical and IT fields are converging. If you study electrical engineering, you don’t have to become pigeonholed, you could become a part of a big ecosystem, such as smart cities.

SPARKS: Does Phoenix Contact have plans to engage closely with electrical contractors and electrical engineers?

CK: Absolutely. We’re a channel dependent company, so we don’t deal directly with end users. Since many of our customers are panel and motor control centre builders, we will continue to work with them and offer training seminars, online portals, white papers and the like.

SPARKS: What is your personal outlook for South Africa?

CK: I may be beating a drum that’s been beaten to death, but obviously energy and water are going to be the biggest concerns in the foreseeable future. However, these challenges create opportunities for companies like Phoenix Contact because we have a lot of solutions in the solar and wastewater spaces. Also, finding talent is difficult; it takes months to find the right skills. Although I have not seen enough statistical data, anecdotally, the ‘brain drain’ and the large numbers of people leaving the country really concern me.

SPARKS: What is your favourite saying?

CK: I guess in any given year it would be different, but coming into a new environment, this one comes to mind. “It ain’t what you don’t know that gets you into trouble. It’s what you know for sure that just ain’t so.” Whenever I start a new position, especially if it is at a new company, I take 90 days before I make any fundamental changes. In those 90 days you observe, and you speak to staff, customers and consultants to build a picture of where the company is. After the first three months you can build a roadmap for the company going forward.

SPARKS: When we asked you for your ‘bucket list’ in 2011, you said you wanted to ride Route 66 on a motorcycle and gain work and life experience abroad. How did that pan out?

CK: I came very close! I mentioned earlier that I did the Californian coastline on a bike; I had to decide between the two, and after researching and talking to people, I learned that Route 66 is mostly highway and desert. I would still like to do it, but would prefer to go with a friend rather than on my own for three weeks, which is how I travelled California. As for working abroad, does Mozambique count? I had opportunities at Schneider to work internationally, but my kids were still very young and my family wasn’t ready to relocate. Over the years, however, I’ve been fortunate to travel to over 55 countries, and probably three times the number of cities. Looking ahead, something I’ve wanted to do for a long time with my wife and kids is an RV road trip in the US. I’ve also never been to South America, so that’s definitely up there.