Virtually every vehicle on the road today is designed with a hood that can be easily opened for access to the engine, so mechanics can perform routine service and diagnose / address problems that arise during its lifespan. Conveyor systems should be designed in much the same way, with convenient points along the length of the belt to allow technicians to inspect its condition, perform service as needed and help prevent catastrophic failure.

Unfortunately, this type of access is often overlooked when engineering conveyor systems until a pressing need arises, which increases the difficulty of ongoing inspection that could have allowed technicians to observe and service critical components before a crisis develops. As a result, costs go up and productivity goes down. 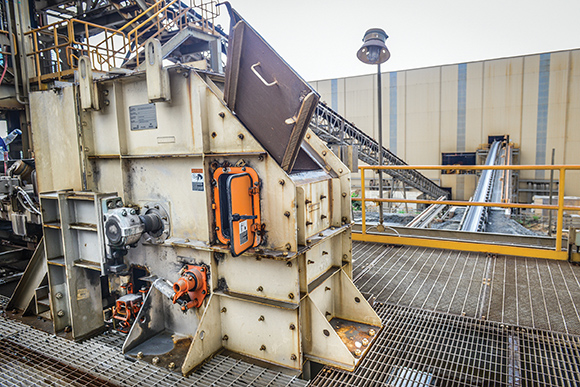 “This is a cascading issue,” says Daniel Marshall, product engineer at Martin Engineering.  “Insufficient access leads to poor maintenance practices, resulting in emergency outages and diminishing the operation’s productivity and safety. From an ownership and management perspective, downtime and injuries affect profitability through loss of production, capital expenditures for new equipment and ongoing insurance implications.”

In the past, managers often decided against the expense of adding safer and easier access points to a conveyor system beyond what is required by code.  However, over the conveyor’s lifetime, safety professionals estimate that poor access adds as much as 65% to maintenance and cleaning costs.

When designing proper access into a bulk materials handling system, there are three easily achieved goals:

“Many conveyor transfer points still have an antiquated roller system tasked with absorbing impact and centering the cargo,” Marshall continues. “These components often break and seize, causing friction and a potential fire hazard. To replace them, several workers must remove the skirtboard and break the plane of the conveyor to reach across the stringer with heavy tools to assess and repair equipment.”

These assemblies can be pulled out by a single worker and – working safely from outside the conveyor and using only a single tool – the box bars can be simply removed and flipped in a matter of minutes to double the service life.

Along the cargo path in the settling zone and beyond, retractable idlers support the belt and maintain the trough angle. Exposed to the punishing environment, gritty dust and extreme weather, rollers can seize over time. Often set closely together in the loading zone to avoid belt sag, slide-out/slide-in roller frames permit workers to perform idler service outside of the belt plane without the need to raise the belt or remove adjacent idlers.

“Wear parts such as belt cleaner blades need to be monitored, serviced or changed regularly to prevent carryback from causing dust and spillage along the belt path,” Marshall says. “However, blade adjustments and changes can require several hours of downtime.”

Primary cleaners – located on the underside of the head pulley – are mounted on rotating assemblies designed to retain the proper tension between the blade and the belt.  Secondary cleaners are located behind the head pulley and raised slightly above the belt line for tension. Specially-designed units can slide in and out by simply pulling a lever and releasing a pin.  This allows blade maintenance to be performed outside of the system by a single worker in under an hour.

A tight seal is the key to preventing fugitive dust from leaving any chute. Many current setups require workers to crouch or crawl under the system or even enter a confined space to inspect it or perform maintenance, which can result in serious injuries. Inspection of the system needs to be fast, easy and safe. Small inspection doors – either solid or grated – can allow several observation points. Larger doors can offer access points with ample space for service of specific wear parts.

A coal plant in Eastern China had belt damage, spillage and dust issues at two conveyor transfer points with outdated equipment in the loading zones.  Raw coal ore was loaded onto the 1 000 mm wide belts traveling 2,56 mps. The first chute had a 5 m high drop chute that loaded into a 12 m long loading/stilling zone. The second chute had a similar drop, discharging into a 26 m long loading/stilling zone.

Suffering from an old design, the belts were supported by impact idlers and a troughed roller system, neither of which was equipped to cope with new production demands.  Equipment failures happened regularly, and without proper accessibility for routine maintenance, long periods of downtime were common. Belt sag created gaps between the belt and rollers, causing fugitive dust emissions throughout the facility. Inadequate impact control led to spillage becoming entrapped between the belt and tail pulley, damaging them both. Excessive downtime, costs for cleanup and equipment replacement seriously impacted profitability. Managers sought a solution that better protected the belt, sealed the chute from dust and spillage, and offered easier inspection and ongoing maintenance.

Technicians from Martin Engineering China were invited to perform an on-site assessment and suggest an affordable solution.  After offering a detailed proposal, the team installed modern equipment that addressed the issues on both conveyors. The first chute was equipped with a track-mounted impact cradle to improve loading and protect the belt and tail pulley.

In addition, slider cradles for smoother centering were installed, along with a full-length apron seal to prevent dust and spillage from escaping.  A comparable solution was installed in the longer chute, with added cradle support down the entire length.  Both chutes featured non-powered dust bag systems to collect emissions.

Since installation, spillage around the loading zones is under control. Dust emissions have been drastically reduced. Operators report that a considerable drop in equipment failure rates has resulted in a substantial increase in productivity. Contributing to the success was workers’ ability to easily inspect and service components by sliding them out and servicing them outside of the conveyor.

“After more than 75 years of working with bulk handlers all over the world, Martin Engineering has discovered that ‘access’ is a common element for both safety and productivity across all industries,” concludes Marshall.  “By adding easy access and monitoring in the design phase, equipment can be better maintained using less labour, leading to reduced downtime. This is reflected in the cost of operation, offering a better overall return on investment.”

Getting the most out of solar lights in...

PIPEFAB: an ideal welding setup for pipe and...