In Uganda, refugees in the Kyaka and Kyangwali settlements and their nearby host communities are set to benefit from two piped water systems recently completed by the International Organization for Migration (IOM) thanks to a EUR 2 million (UGX 8.3 billion) humanitarian aid package from the European Union. 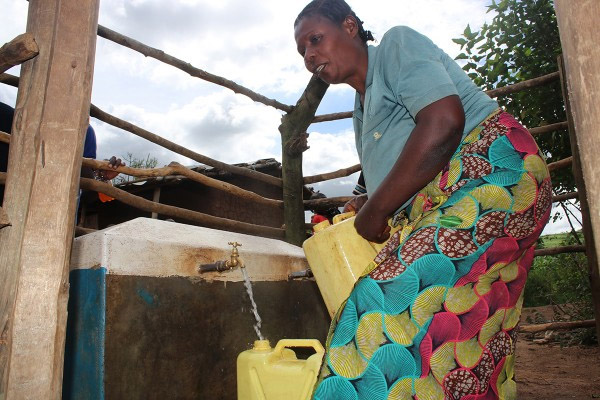 The two water systems were part of a one-year project aimed at strengthening the water and sanitation infrastructure for refugees and host communities in Uganda. Following the sudden increase in refugees fleeing into Uganda, there has been a growing strain on water and sanitation resources in Kyaka and Kyangwali refugee settlements. That has led to disease outbreaks, with IOM and its partners racing to meet the needs of the daily arrivals.

In Kyangwali, IOM used the funds to construct a 25-kilometre pipe network, a 100 000-litre reservoir tank and 30 triple-faucet tap-stands. In Kyaka, the new water system, able to pump 42 000 litres per hour, is expected to serve more than 21 000 people, including refugees and the Ugandan host population.

Outgoing IOM Uganda Chief of Mission, Ali Abdi, welcomed the contribution of the donors. “These water systems have again illustrated the decisive support of the European Union and CERF towards safeguarding and improving lives in refugee settlements in Uganda,” Abdi explained. “In both Kyaka and Kyangwali, the water systems remained on paper until the arrival of this funding from the European Union.”

Speaking about the two systems, the European Union’s Commissioner for Humanitarian Aid and Crisis Management, Christos Stylianides said: “Thanks to EU support, safe water will be brought to communities at Kyaka and Kyangwali. It will reduce over-reliance on the distribution of water by trucks, which is not a sustainable method. The challenge now is for communities and the aid organisations involved to work together for strong governance structures to ensure that the systems are maintained in an excellent state.”

By ensuring that communities have better access to safe drinking water, preventing deadly water-borne diseases, the European Union and CERF funding has not only constituted a life-saving intervention, but will also help reduce the risk of gender-based violence against women and girls, who had to collect water at distant and congested water points.

At the event to launch the water system in Kyangwali settlement, IOM’s Abdi was joined by the UNHCR team leader, Paul Nsiela, and the settlement commandant, Jolly Kebirungi. Also present were representatives of the International Aid Services (IAS). Kebirungi said access to safe water had long been a huge challenge for the settlement, and that the new water system would help significantly to alleviate the situation.

In order to avoid duplication and to make the best use of available resources, the new water systems are linked up to and complement already existing structures installed by other aid organisations.