Africa is a continent with a lot of potential for Crystal Lagoons due to the great growth of its middle class, young population, increasing per capita income and increasing urbanization. In the next 30 years its population will increase by about 1 billion, with 80% in cities. 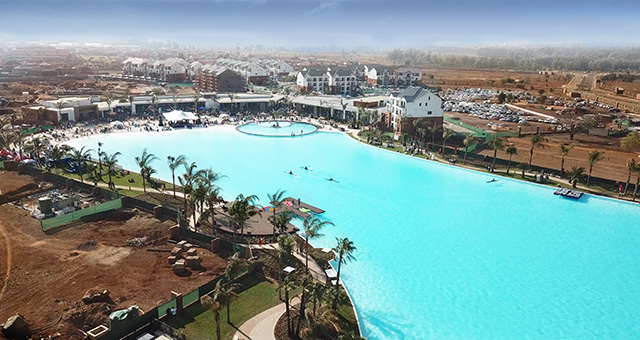 Do you consider Africa an important market for your products?

Therefore, the development of infrastructure and new sustainable and technological urban hubs is intensive. Additionally, it is a continent with many landlocked, Mediterranean areas and some of its coasts are cold and dangerous.

This demographic growth allows us to plan important projections for Crystal Lagoons, since our technology responds to these problems, offering quality of life to a growing population.

Our large bodies of turquoise water and idyllic beaches offer the possibility of swimming and water sports in a safe environment and allow us to develop projects on inland terrain, far from the coast, and generally considered of low tourist and real estate value.

Where can your products be found in Africa?

South Africa, Egypt, Nigeria, Morocco and Angola are some of the African countries where Crystal Lagoons has real estate and public access projects, Public Access Lagoons also known as PAL™, in various stages of planning, design, construction or operation.

The most important market for Crystal Lagoons in Africa is Egypt with over 20 projects in different stages. In fact, one of the world's largest crystalline lagoon (12.5 hectares) is in the Egyptian resort of Sharm El Sheikh, while Bo Island, Swan Lake and Porto Golf will open in the coming months.

The second key market is South Africa, where the partnership with leading local real estate developer Balwin Properties has been tremendously successful and includes six real estate projects. The newest residential project is Munyaka, an ultra-luxury complex was praised by the President of the Republic, Cyril Ramaphosa, who noted that Munyaka “will give life to the South Africa that we long for, promoting its economy through infrastructure. This is a magical place, as I see the lagoon going to be created and open spaces, I say, this is how you created great communities.” In parallel, the development also conquered buyers, as 550 apartments were sold in just four days.

In the area of ​​Public Access Lagoons, there are numerous master agreements currently in negotiation in South Africa, Egypt, Morocco, Nigeria and Angola, the most important one in South Africa, will include eight PAL in different cities spotted around the country.

Do you have branches or distributors in Africa?

Our African market is overseen by our offices located in Dubai.

What are the unique aspects of your products?

Crystal Lagoons® technology, patented in 190 countries, is unique in the world and allows the development of large bodies of water in a crystalline state, at a low cost of construction and maintenance. It is sustainable, so it can be used anywhere in the world, including in Africa, where water is a critical resource.

In fact, these lagoons are filled only once and operate on a closed-circuit, using 30 times less water than a golf course and half that of a park of the same dimensions. They can use any type of water: fresh, sea or brackish from underground sources which would otherwise have no alternative use. Additionally, they allow to collect rainwater.

What advice would you give potential customers?

They also add value to both the real estate developer and the end user. It increases the speed at which they are sale exponentially and substantially increase the value of constructions per square meter.

As an example, South African developer Balwin Properties has experienced the “lagoon effect” twice, a trend that is repeated around the world.

As for Public Access Lagoons, they revitalize unused spaces, neglected areas and enhance environments. They are of high impact as they allow millions of people to fulfill their dream of living just steps from paradise-like beaches. It is estimated that attendance to these complexes is between 800 thousand and one million people a year.

The expansion of PAL is rapidly growing, since they can widely used by large numbers of people, require very low investment and offer a very short-term recovery. They combine attractive services such as restaurants, beach clubs, water sports, retail stores, amphitheaters and a wide range of recreational and cultural activities, such as concerts, shows, open-air cinema and much more.

The success of these lagoons in all markets has generated huge expectations. In 2018 they represented 60% of Crystal Lagoons contracts and this year, there are advanced negotiations with local operators from different markets.