ON THE COVER: Babcock has extended its range of cost-effective and reliable SDLG construction machinery in Southern Africa with the introduction of the new G9220 motor grader and B877F backhoe loader. Efficient and versatile, these machines are designed to provide reliability in action, backed by Babcock’s high quality service and aftermarket support.

The upgrades to SDLG’s value-added range of construction equipment have shown to deliver improved productivity and dependability while maintaining affordable prices. The machinery’s operational efficiency has resulted in the brand significantly extending its client base since its entry into the southern African market in 2012, and Babcock says that the uptake of these machines across the region has exceeded all expectations. 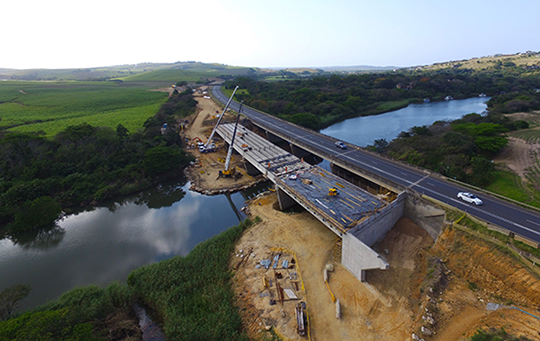 Concor Infrastructure has made solid progress constructing and extending more than eleven structures, including two large bridges and four overpass bridges, on the exciting N2 highway upgrade between Mtunzini and Empangeni in KwaZulu-Natal.

This substantial South African National Roads Agency SOC Limited (SANRAL) project includes the construction of a new northbound carriageway and the rehabilitation of the existing road to form the future southbound carriageway on a 34 km section of this national route.

The number of river crossings meant that ground conditions were often unpredictable. Proximity to the coastline also lent a tidal element to the levels of one of the rivers – a factor which had to be accommodated in the construction methodology.

According to Kyle McDonald, Concor Infrastructure engineer on the project, the two large bridges are among the engineering highlights of the project, requiring construction and placement of 30 metre precast, post-tensioned beams. The precast beams were constructed by a sub-contractor supplied with concrete from a batch plant established at the precast yard, approximately in the centre of the 34 km project.