The geotechnical and rheology labs, which are in short supply in South Africa, are located at the SANRAL materials testing lab in Struandale, Port Elizabeth.

“Both of these speciality labs are in short supply in South Africa, as such very few opportunities exist for graduates to be exposed to these specialised tests,” said Sean Strydom, SANRAL Project Manager. 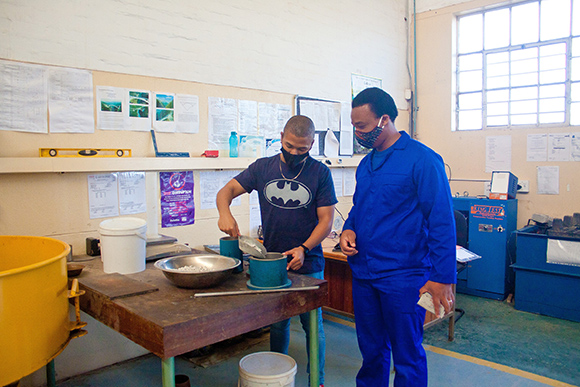 The laboratory managed by Labco Mci-IT Joint Venture is by the South African National Accreditation System (SANAS). The accreditation was obtained in December 2019, six months ahead of the required time. The lab senior mentor and manager, Jeremy Dick is assisted by Charity Veldtman, the lab manager, appointed by the targeted enterprise. Veldtman is a black female who has a National Diploma in Civil Engineering from Walter Sisulu University.

Training within the labs

“The lab beneficiaries include the candidate engineers who get to interact with these tests and equipment during their time in the laboratory. Secondly, as the roads authority, the capacity to have these tests done at no additional cost is very beneficial,” said Strydom.

SANRAL’s candidate engineers each spend three months at the lab in groups of six to eight candidates. During this period, they follow a tight programme to ensure they receive the required exposure.  “We developed a training protocol for candidates under the previous contract which we are still using,” said Strydom.

Jhilmeet who hails from Glencoe in KwaZulu-Natal is a former SANRAL bursary recipient and graduated from the University of Pretoria in 2019 with a BEng Civil Engineering degree.

He says his love and passion for civil engineering started when he researched possible career opportunities and saw the need for dedicated engineers to better South Africa.

“It is different and difficult for everyone at 17 years old to choose what they want to do for the rest of their life. I had taken a great deal of time to think about my potential options. During this time, I asked myself what I like, and this was easily answered since it is maths and science. My love for infrastructure and how it can further help society also led me to choose civil engineering as my career of choice,” said Jhilmeet.

Jhilmeet’s future goals include qualifying as a professional engineer (PrEng).

He encourages matrics to research possible courses and career opportunities which are available. “It is okay if one cannot afford university fees. Bursaries are an incredible blessing, one need only conduct adequate research. Taking a gap year or job shadowing to gain work experience are also relevant options,” he advised.

Dumo Majola from Bloemfontein graduated from the University of Pretoria with his BEng Civil Engineering degree in 2019.

He received a SANRAL bursary in his first year at university and is grateful for the financial assistance.

Majola is a candidate engineer at the SANRAL materials testing laboratory in Struandale, Port Elizabeth.

Majola said his goals include qualifying as a professional engineer (PrEng) and later lecture.

Ntokozo Sikhosana from Newcastle in KwaZulu-Natal graduated from the University of Cape Town in 2019 with his BSc Civil Engineering degree.

He was a SANRAL bursary recipient from 2016 until 2019 and started working as a candidate engineer in the roads agency’s materials testing laboratory.

Before studying civil engineering Sikhosana first did his research on the industry. “I am interested in working in this field and working on national roads that connect everything. I am also a practical person who enjoys being out in the field rather than sitting behind a desk,” said Sikhosana.

“I look forward to my training in the materials testing lab. My advice to those who still have to decide what they want to study, job shadow and do your research,” said Sikhosana.