When Eric Foster originally founded Eric Foster & Genote/Associates (EFG) as a one-man consulting civil engineer practice in 2000, South Africa was a new democracy opening up to many opportunities, with a rapidly changing landscape. 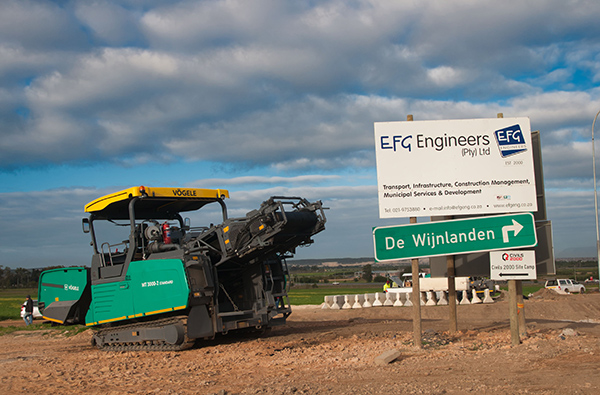 Twenty years on, the practice known today as EFG Engineers has grown to a team of 25, and has weathered many shifts across the past two decades in the property development and construction sector.

Reflecting back, civil engineer Foster says: “When EFG started, there were a number of big and well known South African civil engineering firms that had been around for many years.  Slowly but surely many of these firms were taken over by bigger multidisciplinary international firms.

“What this did was allow some of the smaller firms to grow and offer niche services.  At EFG, rather than seeing this as a threat, we’ve continued to focus on the fundamentals and ensure that we built solid foundations with our clients.  No project has ever been too small for us, and we’ve learnt time and again over the years that some of our biggest projects have come through building these solid relationships with our clients, irrespective of the size of the project they may have initially brought to us.”

Civil engineer David Faure and professional technologist James Marais joined forces with Foster in 2005, both having run their own consultancies before the amalgamation.

With the company highly active in the overall wellbeing of the industry, and a founder member of the Western Cape Property Development Forum (WCPDF),  Faure also sits on the WCPDF’s management committee and leads the organisation’s Transportation Workgroup, advising the Forum on the various critical  infrastructural challenges that often face the industry.

An important role in this is to help navigate the property development and construction sector through the challenges of the current lockdown levels, and to look for common ground between private and public entities in order to achieve this, says Faure: “While we look to the state to provide the funds for major infrastructural projects to get our industries out of the hole, we must not overlook the important role of the private sector in the road to recovery.

“As engineers, architects, planners, environmentalists and consultants we need to assist and stand by private sector developers and investment initiatives, and ensure that the role we play as the interface between developers/investors and the authorities delivers the quickest possible approvals.”

But, in spite of the current challenges the sector faces, there have been and continue to be many highlights for the company in the projects with which it is and has been involved.

Notes Marais: “When Eric, David and I joined forces, there were a few fundamentals in the professional DNA we shared, namely:  to produce quality work and to help our clients and staff realise their ambitions. These together would ensure success for all three of those essential elements - clients, staff and EFG as a company.

“With this in mind, as we look back over the last 20 years, we’re extremely proud of all the projects we have and are involved in, be it a small traffic study or a large road project.”

One of the company’s earlier and very exciting challenges was its involvement in the massive Burgundy Estate in Cape Town.

Says Foster: “We started as traffic engineering consultants and soon landed up designing a number of major roads ourselves – namely, Burgundy Drive, Bosmansdam Road and the M12 – thereby breaking the image of ourselves as being only a traffic consulting practice. This was a stepping stone to further development projects such as Buh-Rein Estate, a three-year contract with the City and also to our involvement in Provincial Road projects.”

Another challenging project for EFG was when it commenced with a review of a traffic study for an approved industrial development and ended up negotiating a private-public partnership for the design and construction of R300/Bottelary Road interchange.  The detailed design of this project was done by co-director Aloysius Horniman who then also participated in the contract supervision.

“The initial phase was a significant project which, in addition to the dualling of a section of Baden Powell Drive, eliminated a number of level crossings along the railway line between Eerste River and Stellenbosch.”

With its strong commitment to both the professionalism and survival of the property development and construction sector, the  company has now also come forward to be a Gold Sponsor of the WCPDF’s upcoming “In Conversation” webinars with leading public and private authorities, and which hopes to find solutions to the successful opening up of the industry from Covid-19.

Says Foster: “We’ve been involved with the WCPDF from the beginning as one of its founder members and believe its role in building better and healthier working relationships between developers and the authorities in order to streamline development and approvals continues to be important.

“It is with this belief that EFG Engineers, as we celebrate 20 years of business, is also very proud to be associated with the WCPDF “In Conversation” online series, and particularly to be sponsoring the first critical engagement with the Premier of the Western Cape, Alan Winde.”