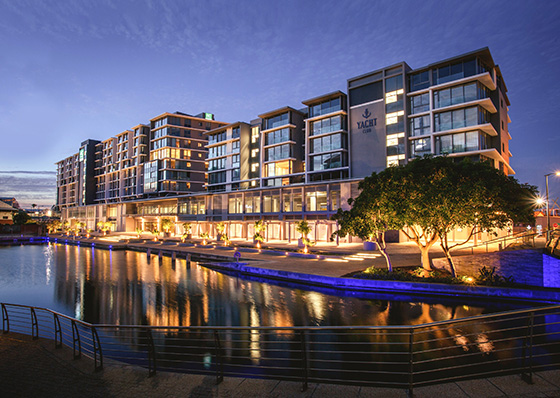 The Cape Town CBD has experienced strong growth over the course of the last decade, stimulated in large part by the 2010 FIFA World Cup™, which saw billions of rands and thousands of people pour into the city, along with substantial private investment. This influx of capital and investment raised the profile of the CBD and positioned it as a sought-after place to live, work and play.

Recognising the need to provide a quality mixed-use development and aligning with the City of Cape Town’s call for “the right developments in the right locations”, the Amdec Group acquired the 11 816 m2 strip of vacant land on the Cape Town foreshore in 2015. The scheme was launched in September of that year, sold out in 14 months and construction was completed within an impressive two-year period.

Built and designed using the new urban principles for which the Amdec Group is renowned, The Yacht Club comprises two apartment blocks, separated by a corridor of open space, in order to comply with the strict building regulations set by local authorities. The West block comprises 120 apartments and the AC Hotel by Marriott, while the East Block houses 50 apartments set above two floors of premium office space. Residents and visitors enjoy spectacular harbour views to the north and Table Mountain views to the south.

Situated on the banks of the Roggebaai Canal, The Yacht Club’s eminent neighbours include the newly expanded Cape Town International Convention Centre (CTICC), the V&A Waterfront and its award-winning Silo District (home of the Zeitz Museum of Contemporary Art Africa) and the new Cape Town Cruise Liner Terminal.

A company recognised for its passion and innovation, the Amdec Group has a 30-year track record of developing and managing world-class mixed-use precincts, including the iconic Melrose Arch in Johannesburg. Their confidence in the economic future of South Africa, and in particular that of the Cape Town CBD, will see the Group introducing another large-scale precinct to the foreshore area in the form of the R15 billion Harbour Arch precinct, the Group’s most ambitious Cape-based project to date.

“Urban precincts such as The Yacht Club and Harbour Arch typify a growing worldwide trend evident in the likes of Canary Wharf in London, Hudson Yards in New York, and Darling Harbour in Sydney,” says James Wilson, CEO of the Amdec Group. “We experience a huge contingent of investors, as well as first-time buyers, opting to invest in our prestigious mixed-use developments, where it's possible to live, work and play in the same location.

“One of our main objectives with this transformative project was to deliver a world-class lifestyle that also offered investors an excellent return on their investment. It was therefore extremely rewarding for us to note that apartments that launched at R48 000 per m2 in 2015 had escalated in value to R75 000 per m2 by 2018, representing an impressive 50% return on costs,” said Wilson.

Results such as these bear testament to the Amdec Group’s decision to develop and build on a site that presented a number of physical and design-related challenges. Along with the relatively small footprint of the long narrow site, it had to contend with very strict building guidelines from the City of Cape Town in terms of retaining a view corridor out to sea and building within specific height restrictions, hence two separate buildings of different heights with a view corridor in between. Building directly onto the seawater canal also required innovative solutions.

“It is our ambition to change the face of city life and raise the profile of residential and commercial property in the Cape Town CBD. We believe that a development such as The Yacht Club helps to elevate the city’s status as a world-class investment destination and a highly sought-after place to visit and live,” Wilson concludes.

Western Cape Provincial Minister of Economic Opportunities, Beverley Schäfer, adds, “Mixed-use developments like these are the future of our cities – allowing people to live, work, and socialise in close proximity to the City. As we build our province's reputation as a global finance and tech hub, the availability of this kind of space acts as a drawcard for businesses and investors alike.”