Artificial intelligence shoots for the stars

Science fiction is full of stories about androids and robots who help enable space travel for humans. The first step has just been taken to make this a reality, with the world’s first artificial intelligence (AI)-enabled astronaut assistant making its debut aboard the International Space Station (ISS).

CIMON, which stands for Crew Interactive Mobile Companion, is a five-kilogram, plastic orb. It was called into action with the command “Wake up, CIMON,” by German astronaut Alexander Gerst, who has been living and working on the ISS since 8 June. CIMON responded to Commander Gerst by saying “What can I do for you?”. 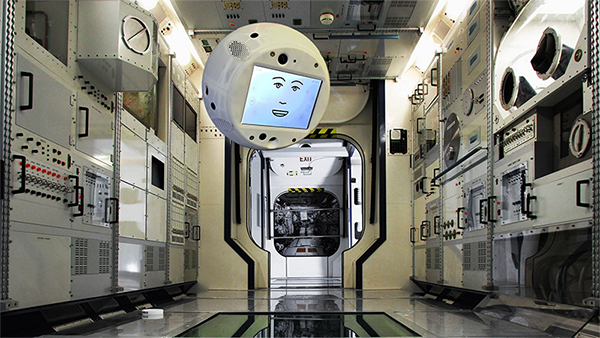 Airbus developed and built CIMON on behalf of the German Aerospace Center (DLR) and supplied the robot’s autonomous navigation capabilities for motion planning and object recognition. IBM Watson allows CIMON to recognise faces and respond to spoken commands and requests with the aid of voice-controlled AI hosted in the IBM Cloud.

The human aspects of the assistance system were co-developed and supervised by scientists from the Ludwig Maximilian University Hospital in Munich. CIMON’s “ears” consist of eight microphones for directional recognition plus a directional microphone for good speech recognition. Its mouth is a loudspeaker through which it can speak and play music.

Two cameras provide CIMON with the data it needs to perform facial recognition, while five other cameras are used for orientation and video documentation. Twelve internal fans enable CIMON to move and rotate freely in all directions. This allows it to turn to a particular astronaut when addressed, nod or shake its head and follow the astronaut spatially, independently or on command.

CIMON is designed to support astronauts in performing routine work, for example by displaying procedures or offering solutions to problems. According to the team responsible for CIMON, it will make work easier for the astronauts when carrying out everyday routine tasks, help to increase efficiency, and improve security as it can also serve as an early warning system for technical problems.

It took two and a half years to create CIMON, which is made up of plastic and metal, created using 3D printing. It was sent to the ISS to research how humans and machines can interact and collaborate in the space environment. CIMON will be deployed to space a total of three times, where it and the human astronauts will experiment with crystals, work together to solve the Rubik’s cube and perform a complex medical experiment using CIMON as an ‘intelligent’ flying camera.

“For us, this is a piece of the future of human spaceflight.If you go out to the moon or to Mars, you cannot take all mankind and engineers with you. So, the astronauts, they will be on their own. But with an artificial intelligence, you have instantly all the knowledge of mankind,” CIMON project leader at DLR Christian Karrasch said in an interview.

While it is still early days for AI in general, CIMON is a precursor to the intelligent machines known by science fiction fans. AI like CIMON may well be the tool that will make the mission to colonise Mars easier and safer, and could be the means through which further space exploration is enabled.