Much ado about Pompeii

In the Campania region of Italy near the modern day city of Naples, there was once a prosperous Roman city. This city wasn’t very different to others in the Roman Empire at the time, until 17 October 79 AD. On that day, Pompeii died under the clouds of ash spewing from the erupting Mount Vesuvius, leaving a perfectly preserved archaeological record that gave us much of the information we now have about life under the rule of Titus, the first Roman emperor to succeed his father on his death. 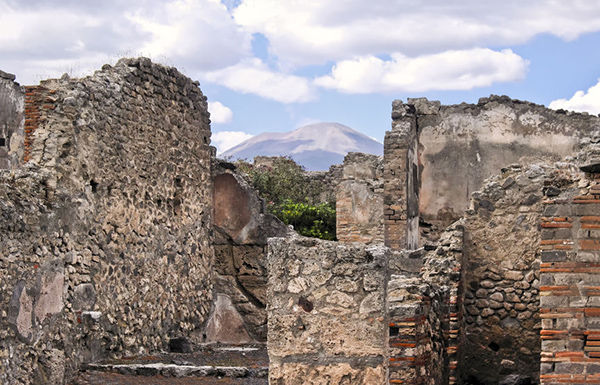 Vesuvius is the only volcano to have erupted on the European mainland in the past hundred years, and it is widely considered to be the most dangerous volcano in the world as there are currently three million people living in close proximity to it. Its eruptions have tended to be violent and explosive, adding to the danger and risk of living in its shadow. In fact, scientists have calculated the power of the explosion to have been 100 000 times more powerful than the nuclear bomb which obliterated Hiroshima.

The volcano last erupted in 1944 and usually has an eruption cycle of every 20 years, meaning it has been building up for almost four times that amount. According to volcanologists, this “repose interval” of 75 years is the longest since its 1631 eruption, which reawakened the volcano after around 500 years of being quiet.

This, they believe, makes it imperative for them to study the 79 AD deposits in Pompeii. Unfortunately, most of the deposits from the ancient eruption are covered by urban sprawl and the products of younger eruptions. Archaeological sites, such as Pompeii and Herculaneum, are among the rare locations where they can dig through the entire sequence of the 79 AD deposits and link the volcanic processes directly to their impact on a town. This is important to gain an understanding of what might happen in the future.

However, this is proving to be challenging, as archaeologists have been working on the site since the 1700s. In addition, volcanologists are accusing modern archaeologists of destroying the geological deposits, meaning that any information about the eruption stored within them is lost.

In a letter published in the journal Nature, Roberto Scandone, Professor of Volcanology at the University of Rome, together with a number of colleagues, says that volcanic deposits are being sacrificed during archaeological excavations and that this is “alarming”. The letter says the removal of volcanic deposits at the site is “disastrous for volcano science”. The writers state that an “enthusiasm for archaeology is committing an act of vandalism to volcanology”.

Massimo Osanna, General Director of the Archaeological Park of Pompeii, denies these claims. In a statement in Newsweek, he said volcanological research at Pompeii has been the subject of attention for a long time—and an agreement allowing scientists to study the stratigraphy is in place. Researchers from the Department of Earth, Environment and Resources (DiSTAR) of the University of Naples Federico II have been studying the 79 AD eruption as part of a “long and fruitful collaboration” between archaeologists and volcanologists, he said.

This includes studying the damage to the victims of Pompeii based on the different eruptive phases. “All the excavation activities...were supervised by the volcanologists [from the] University of Naples Federico II, who were able to record the stratigraphy, take samples and construct a damage mapping,” he stated.

The team who wrote the letter say that two volcanologists have been permitted to see some of the new sections cut through the deposits, but they have no say in whether the sections can be preserved. They point out that in the 1980s, scientists carried out studies of the deposits in the sections revealed by new excavations and this changed our understanding of the threat posed by the volcano, including how the people of Pompeii were killed by pyroclastic flows.

Before this, it was thought they were killed by a rain of pumice, but the studies showed that they died from clouds of volcanic gas and magma. Understanding this meant that strategies for preparing for future eruptions were changed, leading to better evacuation and safety procedures.

This scientific bun-fight will be hopefully be resolved now that it’s been made public, and may yet result in new, joint discoveries if the volcanologists and archaeologists can resolve their differences.