This week, scientists discovered the value in trusting the adage that a fresh pair of eyes can provide new insights. A team led by Professor Paul Barrett, a dinosaur researcher at the Natural History Museum in London, re-examined a fossil that had been discovered in the 1970s, and found that it had been misidentified as Massospondylus, a type of dinosaur that was very common in South Africa 200 million years ago. 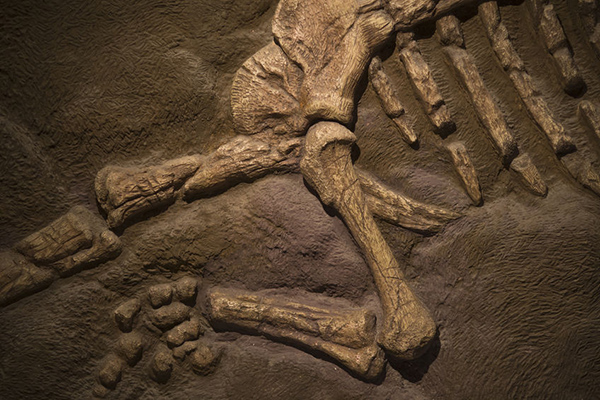 The team determined that this was, in fact, a completely new species of dinosaur, which they have named Ngwevu intloko, which is Xhosa for “grey skull”. The fossil was collected from a farm in the Fouriesburg area in 1978 and has been in the collection at the Evolutionary Studies Institute (ESI) at Wits since then. A number of scientists have looked at the specimen over the years, but they all reached the conclusion that it was simply an odd example of Massospondylus.

The researchers compared Ngwevu intloko with a number of Massospondylus specimens of different ages. Because the dinosaur was so common in South Africa, they had access to specimens ranging from embryo to adult, allowing them to rule out age as a reason for the differences between Ngwevu intloko and other Massospondylus fossils.

PhD student Kimberley Chapelle used CT scanning to each specimen to get as much detail as possible, and found that some of the other fossils were also different to Massospondylus. She described them as “incredibly close to the origins of true sauropods, if not true sauropods themselves”. These findings help to shed some light on what the environment was like at the transition between the Triassic and Jurassic periods.

The CT scans allowed Chapelle to rebuild every bone of a typical Massospondylus's cranium using 3D printing. She was even able to identify tiny features like nerves exiting the brain and the balance organs of the inner ear. Alongside the paper detailing the team’s findings, which was published in the open-access journal PeerJ, a 3D surface file of the skull is available for download. This means that anyone with a 3D printer can make their own Massospondylus skull at home.

Ngwevu intloko isn’t the only new dinosaur discovery in the past few months. Archaeologists have found a new relative of T-Rex in Cruzeiro do Oeste in Brazil. Measuring just over five feet in length, this dinosaur, called Vespersaurus, has been categorised as a therapod, the group of two-footed, meat-eating dinosaurs that includes Tyrannosaurus and Velociraptor.

Vespersaurus is believed to have weighed between 20.4 kg and 40.8 kg. In comparison, an adult T-Rex weighed up to nine tonnes. Paleontologists now believe that Vespersaurus was responsible for fossilised footprints found in the area in the 1970’s, which matched no known species of dinosaur. This find follows shortly after the discovery of Suskityrannus hazelae, another close relative of Tyrannosaurus Rex. This dinosaur was excavated by high school student Sterling Nesbitt during a dig in New Mexico in 1998.

All of these new discoveries are adding to our growing body of knowledge about what the world was like before, between, and after extinction events that happened millions of years ago. They also suggest that there may be a lot more surprises lying in store for scientists among existing fossil collections.