We may think that we have a much better understanding of the human body than Leonardo da Vinci did when he drew the Vitruvian Man, and while we have made great strides, it turns out that we still have discoveries to make. Scientists recently pinpointed a new organ involved in the sensation of pain that could change the way we develop painkillers and treat chronic conditions. 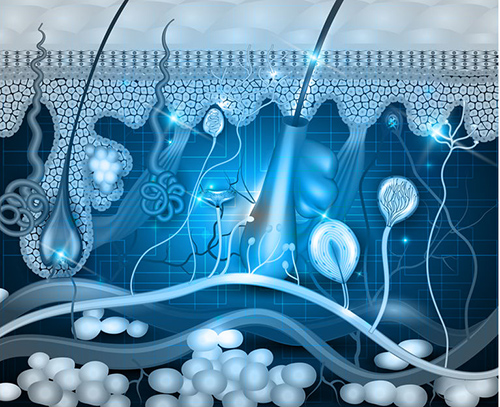 Until now, it has been believed that nerve endings in the epidermis that are responsible for pain sensation are bare; in other words, that they are directly connected to the skin. The new research, which focused on a type of cell called a Schwann cell, found that these cells extend up into the epidermis, the outer layer of the skin. Schwann cells wrap around nerve cells to help to keep them alive – and this was thought to be their only purpose.

The research team, from the Karolinska Institutet in Sweden, used gene editing in mice to make the Schwann cells in their feet produce a protein that could absorb light. This light was used to stimulate the cells and the researchers found that the mice exhibited signs that stimulating these Schwann cells caused pain, including behaviour such as licking, shaking and guarding their paws.

To explore what else might activate the cells, the team exposed the feet of the mice to heat, cold and pinpricks. They then compared their behaviour with the responses of the mice when light was used to slightly activate the Schwann cells, making them more sensitive, or to deactivate them. For all three stimuli, the mice showed a stronger pain response after the cells were activated by light and, in the case of pinpricks, a weaker response after the cells were deactivated.

The study revealed that the Schwann cells have an octopus-like shape, reaching up into the skin. The team has named the structure nociceptive glio-neural complex (NGNC). Because the NGNC forms a unique, intricately-connected network with nearby nerve cells all over the body, the team is arguing that it should officially be designated an organ.

The researchers are now planning to study the exact mechanism by which the cells are activated by pain, down to the activation of proteins in response to mechanical stimulation. While the team hasn’t yet checked to see if the same “organ” exists in humans, all other previously known sensory organs in mice are replicated in us, making it highly likely that we also have an active NGNC.

This is the second new “organ” discovered in as many years. Last year, researchers identified the interstitium, a network of fluid-filled spaces in tissue that hadn't been seen before. These fluid-filled spaces were discovered in connective tissues all over the body, including below the skin's surface, lining the digestive tract, lungs and urinary systems, and surrounding muscles. Previously, doctors thought these tissue layers were a dense wall of collagen.

The scientific community is excited by the results of the NGNC research. If subsequent studies show the same results, it will lead to acceptance of the fact that pain-sensitive nerve cell terminals are not always directly driven by a painful stimulus. Instead, they can be driven by their associated Schwann cells, offering new avenues for pain relief treatments.