Sobering images recently released by NASA have illustrated the effect climate change is having on our planet. Comparing Landsat images from 1972 and 2019, it’s obvious that the branching network of glaciers that empty into Greenland’s Sermilik Fjord has changed significantly in the last 50 years. 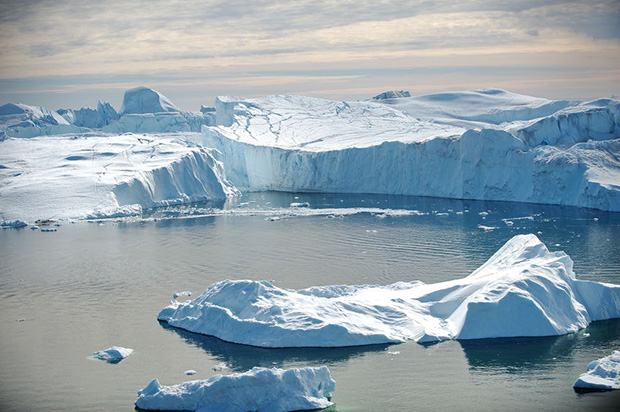 The images show that ice fronts have retreated, rocky peaks are more exposed, and fewer icebergs drift to the ocean today than they did a half century ago. Helheim Glacier, one of the largest and fastest flowing of its kind in Greenland, has retreated approximately 7.5km up a wide fjord, leaving a jumble of sea ice where its calving front used to be. Similarly, Midgard Glacier has retreated approximately 16km, splitting into two branches farther up the fjord.

This has not been as slow a process as people would assume. Unusually warm air temperatures over the past few months have caused record melt across Greenland. Approximately 90% of the surface of Greenland’s ice sheet melted at some point between 30 July 2019 and 2 August 2019, during which time an estimated 55 billion tons of ice melted into the ocean, according to the National Snow and Ice Data Centre.

Greenland is not the only northern country to have observed the effects of so-called “global warming”. Iceland recently held a memorial – described as a funeral of sorts – for Okjökull (known as Ok in the country), the first glacier officially lost to climate change. In a ceremony attended by scientists and public officials, Iceland unveiled a monument to commemorate the “passing” of the glacier.

Oddur Sigurdsson, the glaciologist at the Icelandic Meteorological Office who demoted Okjokull from its status as a glacier in 2014, made an inventory of Icelandic glaciers in 2000. In that year, there were just over 300 glaciers scattered across the island. By 2017, 56 of the smaller glaciers had disappeared.

Ok’s demotion was as a result of the fact that the glacier was not moving because it was no longer thick enough. When enough ice builds up, the pressure forces the whole mass to move. That's where the limit is between a glacier and “not a glacier”, according to Sigurdsson. It needs to be 40 to 50 metres thick to reach that pressure limit.

The idea for the memorial came from anthropologists Cymene Howe and Dominic Boyer, both professors from Rice University in Texas. They made a documentary about the loss of the glacier last year, and came up with the concept of commemorating Ok during filming.

“People felt this was a real loss, and that it deserved some kind of memorial. Plaques recognise things that humans have done, accomplishments, great events. The passing of a glacier is also a human accomplishment - if a very dubious one - in that it is anthropogenic climate change that drove this glacier to melt,” Boyer said in an interview.

“It's not the first glacier in the world to melt - there have been many others, certainly many smaller glacial masses - but now that glaciers the size of Ok are beginning to disappear, it won't be long before the big glaciers, the ones whose names are well recognised, will come under threat.”

A 2017 study predicts that by 2100, up to 2 billion people, a fifth of the world's current population, could be displaced from their homes and forced to move inland because of rising ocean levels. While the prospect of losing small island nations such as Tuvalu, the Maldives and the Marshall Islands as a result is alarming, glacial melt has the potential to threaten the entire world’s water and food supply.

The large ice sheets in the Arctic and Antarctic are part of Earth's energy balance. Their massive white surfaces reflect rays from the sun back into the environment, keeping temperatures mild. As more glaciers melt, energy from the sun will instead be absorbed into the ocean, and as the oceans get warmer, global temperatures will become hotter and cause even more glaciers to melt.

This will change what kinds of crops farmers can grow, potentially affecting how we feed ourselves. Some climates will become too hot for the produce currently being growth there, while other climates will see more flooding, more snow or more moisture in the air. These factors will also affect what can be grown in the area. These are factors cited by the UN Intergovernmental Panel on Climate Change in a report earlier this year, stating that food will become scarcer, grocery prices will spike and crops will lose their nutritional value as the seas rise.

The inscription on Ok’s monument starts with “A letter to the future”. Written in Icelandic and English, the inscription states: “Ok is the first Icelandic glacier to lose its status as a glacier. In the next 200 years, all our glaciers are expected to follow the same path. This monument is to acknowledge that we know what is happening and know what needs to be done. Only you know if we did it.”