Universal flu vaccine on the cards

Every winter, colds and flu do their rounds. For most people, this results in a week of bed rest, but for the very old and very young, flu can still be a killer – up to half a million people worldwide die of the flu every year. 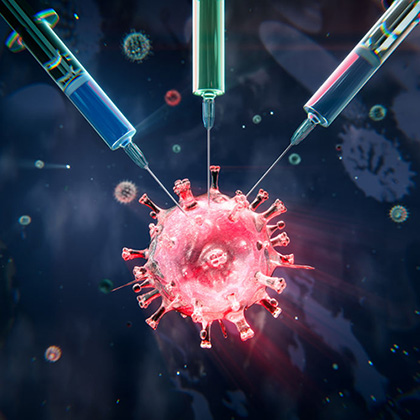 Over the past decade, the flu vaccine has gained in use and popularity, but each year, scientists play a bit of a guessing game to develop a flu vaccine that will protect against the worst strains of influenza. The most effective approach so far has been to monitor the most virulent flu strains in each Hemisphere and use those to inoculate people in the other during their winter, but this has succeeded only in mitigating the effects of the disease.

In fact, the strains of flu spreading across the world every year have become more dangerous as the virus has mutated in response to environmental factors as well as increasing use of antibiotics. This is one of the reasons that current vaccines are ineffective during pandemics, as it usually takes months to develop a vaccine that matches the newly emerging strain.

Researchers now believe that they are close to developing a universal flu vaccine. A team of researchers has identified a previously unknown antibody that protects mice against a wide range of potentially deadly strains of influenza. This antibody, they believe, could be the final piece of the puzzle they need to defeat the flu once and for all.

“There are many strains of influenza virus that circulate so every year we have to design and produce a new vaccine to match the most common strains of that year. Now imagine if we could have one vaccine that protected against all influenza strains, including human, swine and other highly lethal avian influenza viruses. This antibody could be the key to design of a truly universal vaccine,” study co-author Ali Ellebedy, an assistant professor of pathology and immunology at Washington University, said in a press release.

The newly discovered antibody binds to a protein called neuraminidase. The protein, located on the surface of the virus, is critical to the way flu replicates in the body, enabling infected host cells to release the virus so it can spread to other cells. Drugs that target neuraminidase, such as Tamiflu, already exist but they don't work for every strain of influenza, and resistances to such drugs are developing as well.

The researchers discovered the antibody in blood taken from a patient hospitalised with flu at Barnes-Jewish Hospital in St. Louis in the winter of 2017. In addition to containing antibodies against hemagglutinin, the major protein on the surface of the flu virus, the patient’s blood sample contained other antibodies that were clearly targeting something else. They found that at least one of these blocked neuraminidase activity in all known types of neuraminidase in flu viruses, including a variety of human and nonhuman strains.

To find out whether the antibodies could be used to treat severe cases of flu, the research team tested them in mice that were given a lethal dose of influenza virus. Three antibodies were effective against many strains, and one antibody, called “1G01”, protected against all 12 strains tested, which included all three groups of human flu virus as well as avian and other nonhuman strains. Most importantly, all of the mice survived, even if they were given the antibody 72 hours after infection, which is the tail end of time in which Tamiflu can save a person.

A lot of research and testing still needs to be done before these findings can be turned into a universal flu vaccine. However, the scientific community are unanimous in their opinion that this is a very promising start. Unfortunately, with the growing anti-vaccine movement around the world, this breakthrough has come at a time when humanity is reawakening diseases long thought dormant, pushing flu to the bottom of the list of medical priorities.