Human beings have not only littered our planet with garbage, we have also scattered debris across space. There are currently more than 500 000 pieces of space junk orbiting Earth, comprised of disused satellites, pieces of satellites that have been in collisions, as well as pieces of rockets that have been left behind. 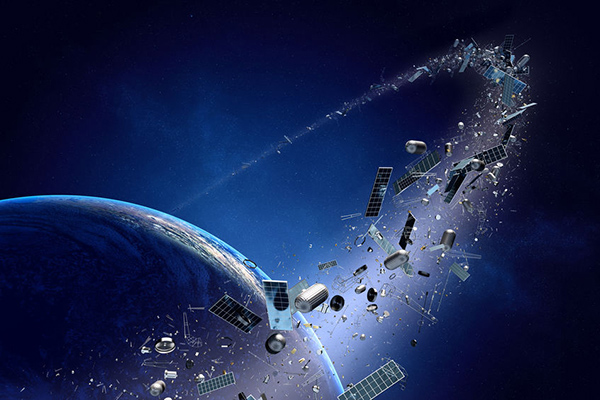 The European Space Agency (ESA) aims to remedy this situation, announcing plans for the world's first orbiting garbage collector. By 2025, the agency plans on launching a four-armed robot that tracks down and collects space waste.

Unfortunately, the robot’s maiden voyage will be its last, as it will burn up in the atmosphere alongside the junk it has collected. In the future, the agency hopes to create a way for the robot to safely eject the rubbish and continue capturing and destroying other pieces.

With mega-constellations of new satellites planned over the next few years, cleaning up the space debris is going to become a matter of urgency for the companies and agencies involved. Today we have nearly 2 000 live satellites in space and more than 3 000 failed ones, and every new satellite launched will increase the risk of collision.

“Even if all space launches were halted tomorrow, projections show that the overall orbital debris population will continue to grow, as collisions between items generate fresh debris in a cascade effect. We need to develop technologies to avoid creating new debris and removing the debris already up there,” Luisa Innocenti, who heads up ESA's Clean Space initiative, said in a statement.

“Imagine how dangerous sailing the high seas would be if all the ships ever lost in history were still drifting on top of the water. That is the current situation in orbit, and it cannot be allowed to continue. ESA's Member States have given their strong support to this new mission, which also points the way forward to essential new commercial services in the future,” adds ESA Director General Jan Worner.

Under international law, satellites are the property and responsibility of those who sent them up, but no-one has attempted a clean-up effort until now. The ESA will test its robot on the Vega Secondary Payload Adapter (VESPA) upper stage, which was sent into space in 2013 for the second flight of the agency's Vega launcher. It was selected as a test for the trash collector not only because it is owned by the ESA, but because it weighs only 100 kg and has a simple shape and sturdy construction.

Swiss company ClearSpace has been tasked with developing the robot as well as demonstrating technology that could be developed for a full programme of debris clean up. The initiative is expected to cost 117 million euro.

Astroscale, a company based in Tokyo, has also been working on the technology for space garbage collectors. Astroscale plans to launch its first demonstrations within the year, but many commentators believe it is doubtful that these will be cost-efficient and will require further research and development.

The announcement of the ESA mission came shortly after the US standards for managing dangerous space junk were revised. The standards make provision for more restrictive rules for US satellite operators — including the Pentagon. However, the new rules stop short of changing the central prohibition on the time post-mission debris can remain in orbit from the current 25 years, making space garbage disposal technology of interest to US-based companies too.