As a leading local manufacturer of electrical control panels, WEG Automation Africa stays at the cutting edge of innovation through its research and development driven approach, which sees its continuous product improvement setting new benchmarks in industry. The company, previously known as Shaw Controls, is part of the Zest WEG Group which, in turn, is owned by Brazil-based WEG Group. 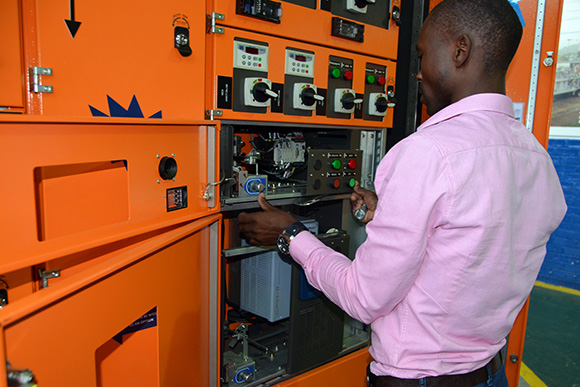 Tyrone Willemse, Business Development Manager – Projects and Contracts at WEG Automation Africa, says the focus throughout the process is on safety and quality as well as local manufacturing capability. The company manufactures a range of low voltage (LV) and medium voltage (MV) electrical switchgear as well as LV fixed and withdrawable motor control centres (MCCs).

“Our fixed pattern boards have three configurations – front entry, back entry and back-to-back,” Willemse explains. “We can supply these in top or bottom busbar, or cable supply entry, to suit the customer’s glanding and entry preferences.”

Willemse says this makes it possible to conduct an assessment and repair of the board after a flash and then it can be returned to temporary use, after a dielectric test, to minimise unscheduled downtime. He notes that the IEC 61641 guideline is beginning to be introduced into LV designs to enhance safety.

“The fully withdrawable MCC option offers the major advantage that operators do not work on a live board in front of the bucket,” he says. “This allows the technician to take the bucket out and move it to a safe environment before working on it.”

Significantly, WEG Automation Africa has introduced a new, fully-withdrawable MCC, compliant with IEC 61439 and IEC 61641 guidelines. Initially sourced from the group’s manufacturing facilities in Brazil, the model is being considered for local build.

With the use of Solidworks modelling computer-aided design and engineering software, the MCC chassis is pre-punched to reduce wiring time. All digital components are loaded onto the system and carefully placed in the design of MCCs, so that equipment can be assembled and replicated to the highest standards.

“Our closed-loop project planning and control system also contributes to ensuring optimal efficiencies in the manufacturing line, saving time and money for our customers,” Willemse adds.

The availability of Aluzinc, instead of mild steel, for the panel shells is another advantage to the standard range of panels. This assists with the continuity of the earthing system and is corrosion-resistant, adding to its safety.

At its extensive facilities in Robertsham in Gauteng, WEG Automation Africa also manufactures a variety of supplementary equipment for use on process and other plants. This includes custom-designed PLC panels, standalone starter panels, junction boxes, remote isolator panels and control desks. Panels are designed and produced for indoor and outdoor applications, whether skid-mounted, in a substation, in a container, in a prefabricated room or a specially constructed E-house.