On 19 July 2019, Kenya’s president Uhuru Kenyatta officially inaugurated the Lake Turkana Wind Power (LTWP) project – Africa’s largest wind farm. Standing out across a desert-like, windy landscape in northern Kenya, the 365 wind turbines have been producing up to 310 MW of reliable, low-cost and clean energy to power homes and businesses across Kenya since 6 March 2019. 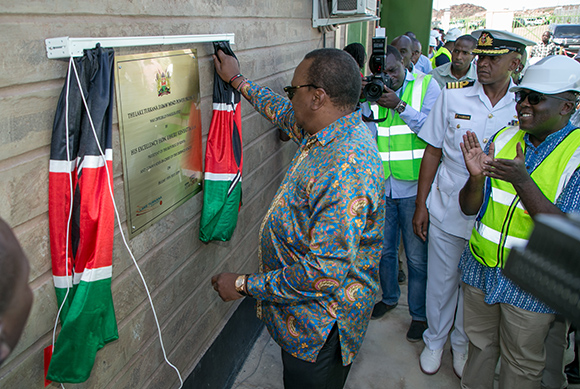 “We feel extremely proud to have been associated with this landmark project and would like to congratulate the Lake Turkana Wind Power team for the successful dedication of this facility to citizens of Kenya,” says Krish Iyer, President of Energy & Chemicals Services for Middle East and Africa at Worley, who attended the inauguration. “This project is a fantastic example of developing successful sustainable projects with local community engagement and making them part of this legacy.”

The completion of the project marks the end of a five-year journey for Worley, who has played an integral role in Africa’s most prestigious renewable energy project since inception. In November 2014, Worley (then WorleyParsons RSA) was contracted by LTWP to provide overall project management, engineering review and construction management services for the LTWP project. Spanning an area of 160 km2 within the Loyangalani District, Marsabit West County in northern Kenya, the project scope included 365 wind turbines of 850 kW each, an electric grid collection system and a high voltage substation, upgrades to 210 km of existing road, an internal site road network and a 160-man self-contained permanent village. Worley’s project management services included overseeing the total schedule, cost and quality of work as well as supervising and coordinating the five main contractors on the project. By June 2017, despite some logistical, climatic and community challenges, Worley had completed the installation process of the full wind farm and delivered its scope of work within the stipulated timeframe and budget.

Following the completion of the 436 km Loiyangalani – Suswa transmission line by Kenya Electricity Transmission Company (KETRACO), the project reached a significant milestone on 24 September 2018 when the transmission line was completed, and hot commissioning commenced.

Bradley Duncan, Senior Electrical Engineer at Worley and head of the commissioning team for the LTWP project, explains that as part of ramping up to full operations, Worley worked in conjunction with Power Systems Dynamics (PSD) to oversee the commissioning tests, and coordinated with KETRACO and Kenya Power and Lighting Company (KPLC) to ensure that the plant was in compliance with all of the requirements as set out in the power purchase agreement, as well as the grid code. By 10 October 2018, the team had fully hot commissioned three 100MVAR STATCOMs, and by 23 November 2019 all 365 wind turbines had successfully exported power to the grid.

On 6 March 2019, Lake Turkana Wind Power went into full commercial operation, having passed all its requisite PPA and grid code compliance testing, and is providing up to 17% peak demand and 30% off peak demand for electricity in Kenya.

Reflecting on Worley’s involvement in this significant project, Tim Gaskell, Project Director for Worley, says that the biggest contribution from Worley to this project is the difference made to the lives of Kenyans and specifically local tribes. “We had a strong focus on localisation and social upliftment to ensure that the surrounding communities benefited from this project.”

“From a business perspective, this project has further proven our successful track record in the delivery of energy and resources projects in Africa, and we are actively pursuing other renewable energy projects in the region,” says Gaskell.