Generator sets have long been accepted in the built environment as a reliable and constant means of power generation, either as the prime source of power for continuous operation or as standby to the utility.

Craig Bouwer, projects and product manager at Zest WEG Group’s Generator Sets Division spoke to Construction World and explained why it is essential to ensure that this alternative power solution is fit for the purpose intended.

“While generator sets do not specifically offer energy consumption reductions, through careful selection of the major components such as the engine and alternator it is possible to reduce diesel consumption and subsequently the operating cost of these machines,” Bouwer says. 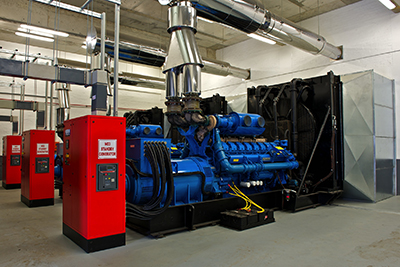 Historically, commercial properties have tended towards a single large generator set which, according to Bouwer, is not always ideal. He says that, while it is common practice to install such a unit to supply the necessary back up power in the event of a power outage, there are numerous benefits to be received by installing multiple smaller synchronised generator sets in parallel.

Firstly, it is more efficient to run smaller generator sets at full load than one large generator set at half load. This eliminates the burning of unnecessary fuel as well as possible damage to the generator set.

“Not only does this improve fuel economy, it also reduces the capital outlay for a commercial property, and most importantly it will facilitate operational flexibility,” he says. 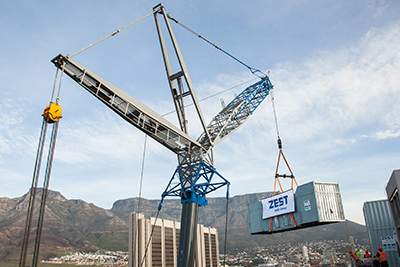 The super silent purpose built generator sets being lifted to the rooftop of the Christiaan Barnard Memorial Hospital.

This local manufacturer of generator sets offers standard off-the-shelf units as well as purpose engineered solutions, and Bouwer is quick to point out that it is advantageous for the company’s technical team to be involved from early on in a project to allow for the most practical and cost effective solution to be applied.

Multiple smaller synchronised generators sets with synchronised controllers communicate with each other, allowing optimisation of the load demand. System reliability and generator set availability is also improved when installing more than one set in parallel onto a common bus. This means that should the first generator set not start, for any reason, the remaining units will then provide the power required.

“Zest WEG Group Generator Sets Division can assist contractors, consultants and architects at the design stage of a project to ensure the system can be engineered to shed less critical load and supply all essential load from the remaining available generator sets,” he explains. This mitigates against a total power outage situation as would have been experienced if the system was designed with only a single large generator.

This type of power solution with synchronised generator sets facilitates operational flexibility and means that there will always be an available unit to supply critical loads in a breakdown or maintenance scenario. In addition to this, when there is more than one generator set operating in parallel partially loading a generator set will be avoided and the generator management system will ensure that only the required number of generators is operated under low load scenarios ensuring the units run at their optimum designed power rating.

When multiple synchronised generator sets are installed, it is easy for the end user to expand the backup power supply should the on-site load increase as the controls and parallel switchgear are already in place.

Chris Watkins, manager drives & automation at Zest WEG Group, says that it is possible to further optimise the load demand by selecting the correct electric motor and Variable Speed Drive (VSD) combination for the application.

A large commercial building could have anything from 40 to 100 electric motors operating, for example, the HVAC system, a fire system, a water treatment plant and compressors for refrigeration. In such a scenario, significant cost savings could be achieved if the motor driven applications are optimised by using top premium efficiency motors and VSDs as starting/control method instead of traditional direct online starters.

Recent installations by Zest WEG Generator Sets Division include six 2000 kVA generator sets at the Promenade Shopping Centre in Mitchells Plain. Installed to provide a total power back up solution, the system incorporates a synchronising panel which controls the medium voltage switching and load sharing.
Involvement at the design stage saw the provision of a bespoke generator set solution to the V&A Waterfront comprising 13 smaller generator sets. These 630 kVA sets have been installed in the parking areas and the existing building and allow for the dropping of a generator if it is not required during low load periods.

Specialist application requirements also form part of Zest WEG Generator Sets
Division’s market offering and the company was responsible for the engineering of two super silent containerised generators that were installed on the roof top of the Christiaan Barnard Memorial Hospital. These sets synchronise with the mains supply. 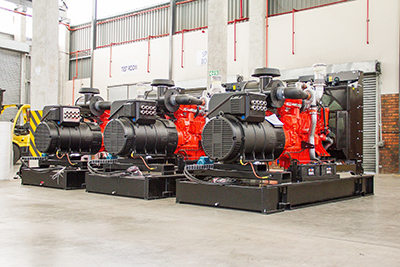 The three 450 kVA generator sets for the Silo 3, 4 and 5 Project prior to testing at the Zest WEG Group Generator Sets facility in Cape Town.

Three 450 kVA generators were supplied to the Silo 3, 4 and 5 Project on the V&A Waterfront as backup power units. These units are controlled by a common synchronising panel and feed three different change overs/buildings within the Silo precinct, and this is also a good example of providing a fit-for-purpose solution for a large commercial complex.

Zest WEG Generator Sets Division produces both stationary and mobile generator set solutions from 10 kVA up to 3 350 kVA at its well-equipped facility in Cape Town. Integrated packages include mechanical and electrical manufacture and assembly as well as electronic design incorporating in-house control panel manufacture.
Included in the marketing offering is the supply and installation of transformers, cabling, bulk fuel systems and sound attenuation with standby generators on a turnkey basis, together with project management, installation, commissioning and maintenance.