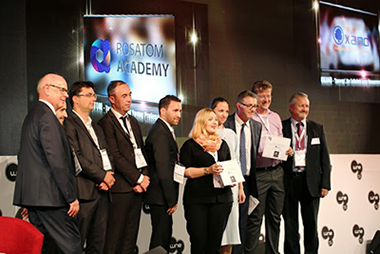 Construction of major facilities often implies cost overruns and longer timelines, ranging from 10% to 50% on average. According to the developers of the system, the situation can be remedied only by effective management, combining IT tools and business processes. The Multi-D-based Project Management System facilitates essential optimization and control of deadlines during assembly of capital construction facilities. Furthermore, the technology can be successfully applied not only to nuclear power projects but to any complex infrastructure build.

The development of the technology was initiated by the ASE Group of companies. Rosatom’s experience has shown that the use of technology can be leveraged to ensure effective project management, thus allowing projects to run on time and within budget. The technology is being replicated in all Russian-designed NPP construction projects deployed both in Russia and abroad.

Jury Nomination Chairman Jacques Regaldo, Chairman of the World Association of Nuclear Operators, noted “the diversity of projects presented by different industrial companies was motivating and challenging. However the Jury draw attention to the projects that involved high levels of operational excellence”. The projects of Apave, EDF and Westinghouse were presented as shortlisted nominees.

About 2016 WNE Awards
118 projects were chosen for the WNE Award competition, 14 of them were shortlisted in 4 categories: Innovations, Operation Excellence, Nuclear Safety and Knowledge Management. The jury included top managers of leading international companies and organizations of the nuclear industry. Among them were Bernard Bigot, Director General ITER, Jacques Regaldo, Chairman of the World Association of Nuclear Operators, William D. Magwood, Director General NEA, and David Drury, Technical Head – Management and Human Resources, IAEA. According to the competition results, 4 winners and 8 nominees were announced. Another 2 projects received special attention of the jury.

About World Nuclear Exhibition
The biennial event was first held in France, Le Bourget, in 2014. This year it attracted 495 exhibitors drawn from 24 countries, 7 215 individual visitors from 71 countries, 50 ministers, secretaries of state and officials and held 2,200 organized business meetings. WNE is an AIFEN (the French Nuclear Industry Exporters’ Association) event, and the association represents over 300 French companies and large organizations (PFCE, PFME, GIIN, PNB) involved in all parts of the nuclear cycle, from fuel production to decommissioning.