In its Q2-2019 Production Results, LSE-listed Acacia Mining, which operates three mines in north-west Tanzania, reports that gold production for the quarter was 19 % higher than the prior year period, mainly due to 39 % higher production at North Mara, offset by expected reductions in production at Buzwagi and Bulyanhulu. Gold ounces sold for the quarter of 143 325 ounces were 10 % below production due to the timing of gold shipments from North Mara which were weighted towards the end of June. 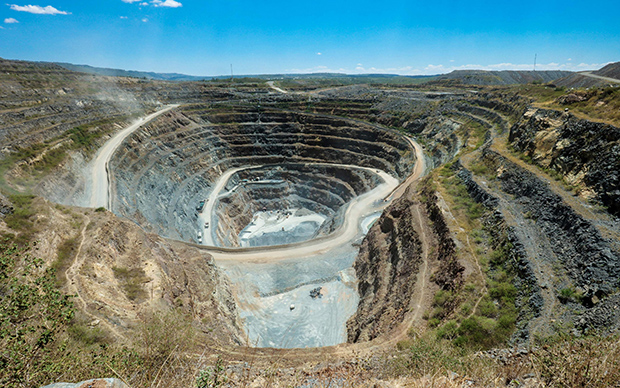 The North Mara mine is a combined open-pit and underground operation (photo: Acacia).

“I am pleased to announce that Acacia achieved a 51 % increase in production in the second quarter of 2019 compared to Q1-2019, following the successful implementation of our revised mining plan at North Mara for both the underground and open-pit mines which saw production at the mine increase by 80 % over the period,” said Peter Geleta, Acacia’s Interim Chief Executive Officer.

“Overall we achieved gold production of 158 774 ounces in Q2-2019 with a particularly strong quarter from North Mara, which set a monthly production record of 47 849 ounces for the month of June. We remain confident of achieving production within our guidance of 500 000 to 550 000 ounces for the year. I would like to thank our people who have made this possible, delivering a strong second quarter across all three of our mines despite the continued challenging operating environment,” said Peter Geleta, Acacia’s Interim Chief Executive Officer.

At North Mara, after successfully addressing the unanticipated production issues experienced in Q1-2019, gold production for Q2-2019 rose sharply to 119 113 ounces, 39 % higher than the prior year of 85 920 ounces. This improvement was driven by the mining of higher grade areas at the Gokona underground mine as well as increased volumes at higher grades from the Nyambirama open-pit mine, combined with a 4,0 % improvement in throughput and a 1,7 % improvement in plant recovery rates.

During the quarter, the Gokona underground mine commenced ore development in the high grade GB2 area, which is the faulted offset continuation of the high grade Golden Banana zone that has been mined since 2015. Ounces from ore development and the first stope were extracted in June, which produced approximately 20 000 ounces of contained gold at a grade of 27,5 g/t. Further stoping in GB2 is scheduled in Q3-2019 and is expected to support the current higher production volumes.

Bulyanhulu produced 9 377 gold ounces for the quarter which was in line with expectations, although 10 % lower than the prior year of 10 443 ounces and 6 % lower than Q1-2019 production of 9 999 ounces. Q2-2019 production was impacted by the expected lower grades recovered from the retreatment of tailings and the resultant lower recovery rates, partly offset by improvements in plant throughput. All production continued to be produced from the retreatment of tailings as a result of the underground mine being placed on reduced operations in late 2017.

Acacia, which is in a long-running dispute with the Tanzanian government over tax payments and other issues, has Barrick Gold as its majority shareholder. In May this year, it received an indicative proposal from Barrick regarding a possible offer for the entire issued and to be issued share capital of the company not already owned or controlled by Barrick.