Delegates at the 34th annual Southern African Transport Conference (SATC) were provided with glimpse of a future connected and integrated Africa, ably supported by a sustainable transport model for people and goods – comprising rapid railways, express roads and regional aviation on branch airlines. 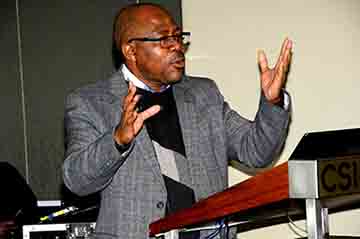 Imagine travelling from Johannesburg to Durban in almost two hours or travelling by high speed train to any country in Southern Africa?

This is no longer a science fiction discussion, but part of feasibility studies that have already been conducted by Chinese and African governments and companies, which was revealed during the China Africa Co-operation Forum discussion on priority transport networks' development on the third day of the SATC, taking place at the CSIR International Convention Centre.

Fred Wen of China Railway Group provided a detailed look at a high speed railway network between Johannesburg and Durban – with speeds of up to 300 km/h.

"We conducted a feasibility study in 2010 looking at two options. One being a passenger dedicated railway at 300 km/h and the other being a mixed-use line for people and cargo running between 180 km/h and 20 0km/h," explained Wen.

Although he did highlight that the current power situation in South Africa was a limiting factor, as a high-speed railway network running over 550 km in two hours would use the same amount of power that is currently used to power Johannesburg and Durban for a week.

"That is why there is the second option for passengers and cargo. It is not technically a high-speed railway as the speed is between 180 km/h and 200 km/h – but power consumption is one-third cost and the infrastructure costs less than a passenger-dedicated railway line," he explained.

However, this remains in the future. There will be a high speed train network between Johannesburg and Durban, but it will not be in the next few decades, according to Wen.

Other large-scale projects formed the basis of discussion on the three priority Transport Networks' Development: China Africa Co-operation Forum at the SATC. These pertinent topics included the:

• South African Infrastructure and Logistics Plan for the North-South Corridor development, by keynote speaker Thami Ngqungwana from the Department of Trade and Industry;
• Outline of the Mozambique Infrastructural Development Plan 2015 – 2019;
• Progress on the Tambo Spring Logistics Hub, in Gauteng; and
• Overview of the Mueda Corridor, northern Mozambique.

The outcomes of the forum will form the basis of the 6th Ministerial Meeting of China and the African Union, which will be held in South Africa in December 2015.
This follows on the heels of the South African government joining the Asian Infrastructure Investment Bank (AIIB) at the end of March 2015, with Egypt. The bank will collect USD100-billion funds for infrastructure constructions from Asia to Africa.

As part of this plan, Kenya will be used as an access point and will expand the scope to the African continent for potential infrastructure development.

Exploration success for Perseus in Ghana

FAW Trucks commits to vision and objectives of...

The role of wind power in the SA...