Endeavour Mining has announced the successful completion of the 25 % volumetric upgrade of the carbon-in-leach (CIL) plant from 4 Mt/a to 5 Mt/a at its Ity mine in Côte d’Ivoire.

Following the commissioning of the 4 Mt/a plant in April 2019, Endeavour launched optimisation and de-bottlenecking work to increase the plant capacity by 25 % for a minimal cost of between US$10 and US$15 million. Integration of components to achieve the increased throughput was carried out during the scheduled maintenance downtime with the plant achieving an annualised throughput exceeding 5 Mt/a in recent weeks. 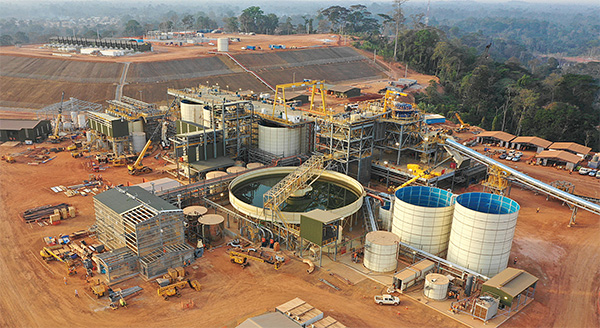 The Ity CIL plant, which has now been upgraded (photo: Endeavour).

Sébastien de Montessus, President and CEO, commented: “Building Ity on time and on budget has been a key achievement for 2019. With the plant upsize now complete, we are well positioned for 2020 and beyond. We believe the increased plant capacity will help accelerate the value created through exploration.”

Endeavour also reports that it has successfully consolidated the full 125 km trend along the Ity Birimian belt with the acquisition of the Mahapleu tenement.

Mahapleu has been purchased for a minimal cash consideration and a royalty based on a sliding scale depending on the gold price (varying from 1 % below US$1 200/oz to 2,5 % above US$1 850/oz).

An airborne Mag-VTEM survey was previously carried out on the Mahapleu tenement. The Mahapleu central area, known as Doui, appears to host a large intrusion which has the potential to be similar in type and size to the one associated with the large mineralisation event that occurred at the Ity mine complex. Endeavour expects to initiate ground surveys in early 2020.

“We are very excited to have consolidated control of the entire 125 km Birimian corridor along the Ity mine,” said Patrick Bouisset, Endeavour’s Executive Vice President Exploration and Growth. “The Mahapleu tenement is a highly prospective area which remains unexplored despite being located within proximity to the Ity mine. With our primary exploration objective of extending mine lives beyond 10 years for both Houndé and Ity well on track, we can now focus on increasing our greenfield exploration efforts in Côte d’Ivoire with Mahapleu ranking high within our large greenfield portfolio, alongside Fetekro.”

Endeavour, listed on the TSX, is an intermediate African gold producer with a solid track record of project development and exploration in the highly prospective Birimian greenstone belt in West Africa. It operates four mines across Côte d’Ivoire (Agbaou and Ity) and Burkina Faso (Houndé and Karma). Projects in the pipeline include Kalana in Mali and Fetekro in Côte d’Ivoire. An updated feasibility study on Kalana is heading for completion while Fetekro is the most advanced of Endeavour’s greenfield exploration properties.