A company which is fast making inroads into the conveyor field is NEPEAN Conveyors, based in Roodepoort near Johannesburg, which can offer a full turnkey service – from engineering through to commissioning – to organisations needing conveying solutions. Modern Mining recently spoke to the company’s General Manager, Willem Niemandt, to learn more about its product and service offering.

NEPEAN Conveyors in South Africa is part of Australia’s Nepean Conveyors , which itself is a division of the NEPEAN Group, which was founded in the 1970s by David Fuller, a toolmaker by trade who started in business with a small machine shop. This has since grown into one of Australia’s leading privately owned engineering, mining services and industrial manufacturing organisations, with over 1 200 employees and a global footprint. In 2017 NEPEAN acquired Sandvik’s conveyor components businesses and the specialist conveyor systems business in Finland, a transaction which included nearly 200 000 m2 of manufacturing operations across Germany, Brazil, Australia and Finland. 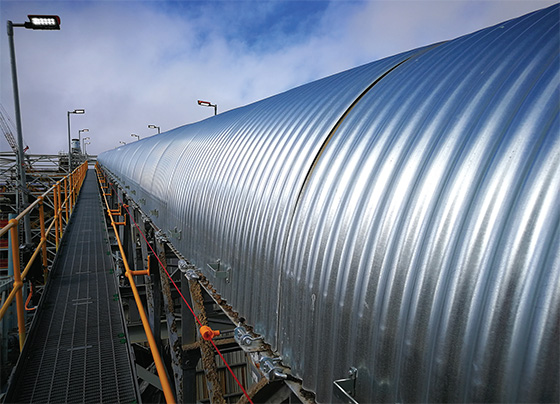 This conveyor, manufactured by NEPEAN in South Africa and exported to Australia, feeds a biomass boiler.

NEPEAN Conveyors ranks as one of Australia’s most successful suppliers of conveyor and materials handling solutions and the South African company is intent on following in its footsteps and already has some impressive installations under its belt. These include many underground trunk conveyor systems with capacities of up to 4 500 t/h and drives in the megawatt range.

Recounting the history of NEPEAN in South Africa, Niemandt says the South African company was established in 1995, with its original focus being on the sale of OEM equipment such as winches, belt maintenance equipment and the patented BOSS coupling. “More recently, and in response to the weak market for conveyor components, we decided to go beyond sales and design and move into the manufacture of conveyor and related systems such as transfer stations and mobile radial stackers,” he explains.

Niemandt, who was previously Engineering Manager with Sandvik Mining Systems Africa, joined NEPEAN in 2016 and a year later assumed his present position as GM. He has played a major role in setting up the South African manufacturing facility – which has 2 400 m2 under roof – and is driving the move into the fabrication of complete conveyor systems.

“Being able to design and manufacture gives us a competitive edge,” he says. “We can customise solutions for our customers and our turnaround time is fast, typically measured in weeks or just several months, with this including design, drafting, manufacturing and corrosion protection if required. Most of our customers undertake installation themselves but we can also handle this if the customer prefers. We don’t have our own installation crews so we will sub-contract the work and closely supervise it.”

NEPEAN South Africa’s main market is underground and surface mining. “Initially, we were very involved in systems for coal mines but we have now broadened our service to include hard rock mines. Most of our customer base is in South Africa but we have worked much further afield, as far north in fact as Guinea and Senegal,” states Niemandt.

One recent contract saw the company supplying two 200 kN belt clamps for a project in the DRC. The clamps were installed on a 1 500 mm wide inclined belt conveyor with a lift of 190 m with the clamps isolating the belt during its installation on the conveyor structure. The clamps are designed not to exert a clamping force of more than 2 MPa to prevent damage to the belt when clamped.

A fairly new market for NEPEAN is the refurbishment of conveyor structures and when Modern Mining recently visited the company’s Roodepoort facility, the company was about to start work on the renovation of a system from a local coal mine. “With fewer greenfield-type projects around, mines are having to get the most out of existing assets, so we foresee refurbishment becoming an increasingly important part of our business,” says Niemandt.

Looking ahead, Niemandt is optimistic about prospects for the company. “Our decision to manufacture complete conveyor systems has been a successful move. Business conditions remain constrained but we are definitely on an upward path in terms of turnover and revenue. We also intend expanding our African business. We’ve already shown we can work successfully all over the continent and further penetration of the African market will be a definite focus for us in the future.”