A big attraction at the Electra Mining Africa 2018 show in Johannesburg was regular – and very convincing – live demonstrations by Fogmaker South Africa of the Fogmaker fire suppression system, which has applications in a range of industries, in particular mining. Fogmaker is differentiated from its competitors, who all use either dry chemical powder technology or low-pressure foam systems, by being a high-pressure water mist system.

Talking to Modern Mining at the show, Fogmaker South Africa’s MD, John Russell, said that while the product was relatively new in South Africa (it was launched locally in 2015), Fogmaker has a large installed base around the world. “The system was developed in Sweden in 1995 and since then more than 150 000 units have been deployed globally in over 50 countries. In South Africa, we are making significant inroads into the market and have had particular success with the forestry and ports industries and, increasingly, mining.” 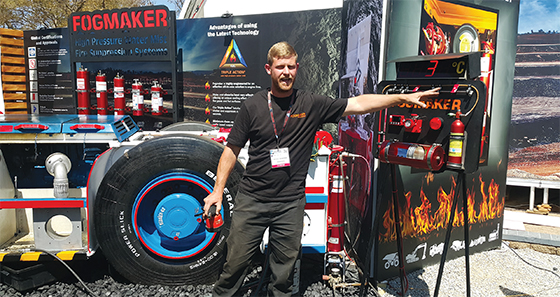 Designed specifically for enclosed engine compartments (which is where most fires on vehicles start), Fogmaker can be installed on most types of mobile mining equipment, whether used underground or on surface, and in stationary equipment, such as containerised gensets. At Electra Mining Africa, for example, it was demonstrated on an actual underground Load-Haul-Dump (LHD) machine.

Water mist makes use of both fire-fighting approaches used in combating fire, namely total-flooding and direct-application. Total-flooding is achieved by the Fogmaker system by generating a dense blanket of micro-water mist droplets within the protected area, flooding the entire engine compartment and ensuring hidden and out-of-the-way areas are reached. The water mist is generated under high-pressure through patented special nozzles. The special nozzles create microdrops with an average size of 50 µm. One drop of water, typically 1 mm in diameter, is converted to 8 000 of these microdrops.

When these microdrops come into contact with any heat source, they quickly convert to steam, replacing air (along with oxygen) with inert gas. This quickly chokes and extinguishes the fire, as was repeatedly demonstrated with over 250 live demonstrations over five days at the show.

In the design and layout of the system, nozzles are placed to also ensure direct-application of the water mist on high risk and hot areas, such as the turbo and exhaust manifold. During the extended discharge of more than 60 seconds, these surfaces are cooled to below the flash point of most fuels, preventing re-ignition.

The system includes a very low concentration of AFFF – Aqueous Film Forming Foam. This foam coats organic materials and fuels with a thin layer of foam, preventing its contact with oxygen and suppressing its combustion.

The patented piston accumulator, which contains the extinguishing agent under pressure, allows for a complete discharge regardless of the orientation of the piston accumulator, leading to a versatile installation footprint either vertically or horizontally. This, together with a compact, neat design, enables the system to be fitted in confined, internal compartments and out-of-the-way spaces offering protection against falling trees and rocks. By placing the accumulators horizontally, the centre of gravity is lowered and strain on brackets is reduced, thus reducing system maintenance.

Equipped with automatic hydro-pneumatic fire detection, which is totally independent of any power source, both the detection and suppression work even when the electricity supply is disconnected.

As there is no powder or mess to clean-up after actuation, resetting of the discharged Fogmaker suppression system is said to be simpler, easier, faster and more effective than is the case with powder or foam suppression systems. “After a discharge, it’s a simple matter of replacing the automatic detection tube and nozzles, and refilling the piston accumulator, thus keeping costs and downtime to the absolute minimum for the end-user,” said Russell.

Advantages of the Fogmaker system include the fact that it is a clean technology, its low maintenance and a total lifespan cost that is significantly lower than competitor systems.

According to Russell, the main challenge facing Fogmaker South Africa is to ‘educate’ the market about Fogmaker and the advantages of high pressure water mist. “Traditional systems still dominate in South Africa, simply because there wasn’t an alternative until we entered the market three years ago with Fogmaker. What we experience, however, is that once companies test out our systems, they are extremely impressed. Certainly, we are increasing our market share in mining and we are aware of two mining houses that have already decided to adopt water mist technology.”

The Fogmaker fire suppression system is designed and manufactured in Sweden in accordance with ISO 9001 and ISO 14001 standards and has obtained many global approvals, including Underwriters Laboratories (UL) in the USA, the Swedish Fire Defence Association’s SBF 127 and 128 and Australia’s AS 5062 standard.

How the SA logistics industry can recover from...

Phakamisa’s wide range of specialised services for the...

Mining in the new world: Driving change to...