While there is currently a dearth of new ‘greenfield’ mining projects in the South African mining space, WorleyParsons RSA, the South African arm of the global WorleyParsons engineering and project delivery group, continues to be busy, reflecting its status as the Mining Centre of Excellence within the group – which has seen it working on mining projects around the globe. The company’s CEO, Denver Dreyer, also makes the point that the South African operation has been buoyed over the past year by a surge of ‘stay-in-business’ type contracts placed by the platinum mining industry in particular. 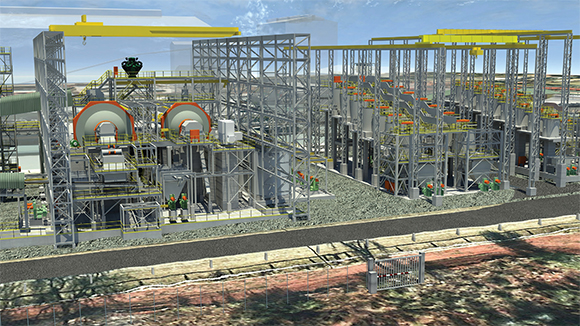 A typical ‘digital twin’ of a processing plant designed by WorleyParsons RSA for a platinum mining customer.

Dreyer, a graduate electrical engineer who has been at the helm of WorleyParsons RSA since April 2016, says that there are clear signs that the mining industry globally is rebounding. “Many commodity prices have improved over the past year and certainly we’re seeing the mining market come back in areas such as Australasia and Central Asia. Conditions are generally still subdued here in South Africa but north of our borders there are some very positive developments in countries such as Zimbabwe, Zambia, Tanzania and the DRC with much of the new momentum we’re observing being related to ‘battery minerals’ projects which are either in the planning stages or under development.”

He adds that WorleyParsons RSA has also benefited from a growing trend for mining houses to implement projects designed to either allow them to stay in business or to unlock value from existing assets. “There are not too many big capital projects being awarded but we are seeing an increased emphasis by mining companies on smaller ‘brownfield’ projects aimed at improving and optimising their operations. We’ve done particularly well in the platinum field, both in South Africa and Zimbabwe, with contracts to a value of over R100 million currently in progress.”

In South Africa, the company’s flagship project remains the US$2,1 billion Venetia Underground Project (VUP) of De Beers, which will see the life of this Tier-1 asset being extended into the 2040s. WorleyParsons RSA has had an involvement in the project – which includes the sinking of two vertical shafts to a depth of just over 1 km – from the earliest days, having been responsible for the feasibility study. It is now the EPCM contractor, working closely in a successful ‘tripartite alliance’ with the client, De Beers, and the main shaft sinking and decline contractor, Murray & Roberts Cementation.

The huge reservoir of mining talent at WorleyParsons RSA is deployed not only on projects within the African region but also further afield. “As the Mining Centre of Excellence within WorleyParsons, our engineers are working on mine development and mineral processing contracts secured by the group across the globe,” Dreyer comments. “In essence, we do the detailed engineering on these contracts. When they move into the execution phase, then our involvement typically diminishes – unless, of course, they are located within our own region, in which case we would also handle execution.”

He stresses that the interaction between WorleyParsons RSA and the wider group is seamless. “WorleyParsons is geared to harnessing its resources – wherever they are located – to provide clients with the best possible service. All the offices utilise the same systems and it doesn’t matter where you log in – the same protocols and systems and procedures apply. WorleyParsons has truly perfected the art of working across national and regional boundaries.”

WorleyParsons RSA had been selected as the Mining Centre of Excellence within the group because of its outstanding track record in servicing the mining industry in Africa. It has managed more deep-level shaft projects in the world than any other company – among them some standout projects such as Impala’s 20 and 17 shafts and the Bakubung platinum mine. It also has world-class mineral processing skills – covering both hydrometallurgy and pyrometallurgy – and has been responsible for designing many large processing plants in the Southern African region.

“From strategy to operations we realise value through our extensive local experience and integrated solutions,” says Dreyer. “Our experts have a thorough understanding of the total mining business value chain from exploration through to eventual mine closure.”

He adds that an integral part of the Worley­Parsons offering is Advisian, the independent advisory and consulting arm of the group. Technologies that Advisian can deploy on behalf of clients include StepWise, a fully integrated financial and technical and process model that requires minimal financial commitment and which takes a low-risk approach to providing the best technical alternatives in a quick and cost-effective way.

“StepWise allows mining companies to evaluate the technical and financial viability of their orebodies,” Dreyer explains. “Junior companies in particular appreciate it as it allows them to quickly arrive at a point where they can either decide to move into implementation with a project or put it on hold. It all but eliminates the risk of over-spending on projects that have little hope of being economically or technically viable.”

Although historically WorleyParsons RSA has derived a major part of its turnover from mining, it operates in all the business sectors that WorleyParsons targets globally, namely hydrocarbons, minerals, metals & chemicals, and infrastructure. “We are moving towards having less dependency on mining and we’ve completed some notable contracts in the infrastructure and energy field, including the Lake Turkana Wind Power Project in Kenya. Now commissioning, this is able to generate up to 310 MW and is the largest development of its kind in Africa,” he states.

“We’ve been fortunate enough to have been recently awarded a second renewables contract in Kenya. This is for the Kipeto Wind Power Project which will have a capacity of 100 MW and will be the second largest in the country after the Lake Turkana project. We are acting as the owner’s engineer and the contract has a 22-month duration.”

Discussing WorleyParsons’ strategy in Africa, Dreyer says the group regards the continent as a key growth area. “Quite clearly this is a continent that is rapidly developing and opportunities abound for WorleyParsons in every market segment in which it operates. Traditionally, WorleyParsons RSA has been strongest in the Southern African region but we are certainly keen to work throughout the continent. Having said this, we are selective in what projects and clients we will take on and in which geographies we will operate, which inevitably makes our playing field somewhat smaller than it would otherwise be. Above all, we value high ethical standards and transparency and will never do anything to compromise these principles.”

Within South Africa itself, WorleyParsons has embraced the concept of transformation and has a vigorous Enterprise and Supplier Development (ESD) programme in place which is a model of its kind. In terms of the initiative, the company is partnering with a number of black-owned Small and Medium Enterprises (SMEs) to jointly deliver services over the mining, water, energy and infrastructure sectors.

“We’re very proud of the programme, which currently sees WorleyParsons RSA supporting 12 companies,” Dreyer states. “We have no equity in these SMEs but we do provide support of every type – not just technical but also legal, marketing and commercial. We are doing this because we recognise the need to broaden the base of the engineering industry in South Africa by transferring skills to black-owned companies and by helping these companies to grow.”

While WorleyParsons RSA is one of the biggest organisations of its kind in Africa, it represents only a relatively small part of the international WorleyParsons group, which has 116 offices in 42 countries and over 26 000 employees. In FY2018 (the year to 30 June 2018), it recorded revenues of A$4,75 billion and a statutory net profit after tax of A$62,2 million, an 85,7 % improvement on the prior year. In FY 2018 the group secured 94 significant awards compared with 86 in FY 2017.

Listed on the ASX, the group is already one of the leading providers of consulting engineering and project delivery services globally. It is set to become bigger still. In October this year, it announced it had entered into a binding agreement to acquire US-based Jacobs Energy, Chemicals & Resources division, a leading global technical services provider across hydrocarbons, chemicals and mining & minerals. The deal is worth A$4,6 billion and will effectively double the size of WorleyParsons.