While Botswana only has one active colliery, Morupule, there are several junior companies that are developing new coal mines that are planned for production either later this year or in 2019. One of these is privately owned Maatla Energy, which is hoping to start construction of its Mmamabula coal mine shortly. It anticipates a 12-month ‘build’ which means that commissioning could take place in the third quarter of next year.

Maatla’s strategy is to develop Mmamabula in two phases. Phase 1 encompasses the construction of a coal mine which will focus on the production of approximately 100 000 tons per month of sized coal (from 140 000 tonnes ROM) for the inland market in South Africa and regionally while Phase 2, which is at least two to three years behind Phase 1, envisages the development of a Gas to Liquids (GTL) business based on the Mmamabula resource. Phase 1 will be undertaken through Maatla’s subsidiary, Maatla Resources, while the ‘vehicle’ for Phase 2 will be a second subsidiary known as Maatla Refineries. 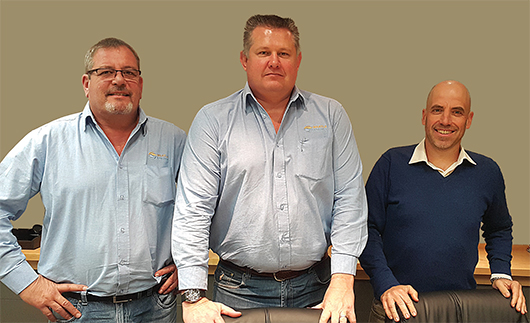 The Mmamabula project is located 145 km north of Gaborone (and 125 km south of Palapye) in the Mmamabula coalfield, which hosts a total resource in excess of a billion tons of high-grade coal and which is the western extension of South Africa’s Waterberg coalfield. The property is accessed by a 20 km gravel road from the A1 asphalt highway linking Gaborone and Francistown. The project is held under a single licence which comprises three separate areas, A, B and C, with B and C extending to the border with South Africa.

A neighbouring project is Jindal’s Mmamabula Energy Project (MEP), which it acquired when it purchased Canada’s CIC Energy in 2012. Other companies with assets in the area are Australian junior African Energy, which holds the Mmamabula West project, and Minergy (run by Andre Boje, previously of Wescoal), which is developing the Masama project on the south-western edge of the coalfield.

Outlining the background to Maatla’s coal project, the company’s CEO, Jacques Badenhorst, says that Maatla acquired the licence – which covers a total area of 82 km2 – in 2015 from a Botswanan company, Waterplus, which remains involved in the project through a 15 % stake in Maatla Energy.

“All the drilling required to define a resource had been completed by the time of our acquisition of the project” he says. “Since then, we’ve taken it up the value curve, producing a Competent Person’s Report (CPR) in December 2016 and a Phase 1 feasibility study in March 2017. In January this year we completed our Environmental Impact Assessment (EIA) and we received the environmental go-ahead for the project in April. All the permitting we require is now in place with the exception of the mining licence, which we expect to receive within the next few weeks.”

According to the feasibility study, the project – with a life of mine of over 25 years – has very healthy economics. The IRR is estimated at above 50 % with payback on the estimated capex of BWP 407 million being achieved in two years.

Describing the planned mine, Badenhorst says that it will be an opencast operation initially – starting with Area A – although underground methods using continuous miners are also within the mine plan. “Our total resource on a mineable tonnes in situ (MTIS) basis is 90,39 Mt with Area A accounting for 5,77 Mt, Area B 7,72 Mt and Area C the balance of around 77 Mt.” He adds that the mine will exploit two coal seams, D1 and M2, with D1 having a thickness of 4 m and M2 3,3 m.

The planned washing plant will comprise a crushing circuit, a DMS circuit, a spiral plant, an administrative office and a full metallurgical laboratory. The facility will have a capacity of 170 000 tonnes per month ROM and will produce a sized product for the regional market. It will also have the flexibility to produce RB1/RB3 quality coal for the export market.

The project works will include the construction of a new rail siding 20 km from the mine at the Tropic of Capricorn. Says Badenhorst: “We anticipate that our product will be shipped to market either by truck or rail, with probably a 50:50 split between these two means of transport. Looking further ahead, we’re ideally situated to make use of the planned Waterberg rail link which would link the Waterberg area in South Africa with the Botswana rail network. Our understanding is that this link could do up to 20 Mt/a, which would definitely be sufficient to open up the entire Mmamabula coalfield – and indeed other coalfields in Botswana. Having said this, the project is totally viable based purely on existing rail capacity supplemented by road haulage.”

Maatla is confident that it will have little difficulty selling the product from the new mine. Dr Mike Seeger, Business Development Director, says the company has carried out a very intensive market study. “We’ve worked backwards from the market study, reverse engineering the project, if I can put it like that, based on very conservative market projections on the demand for coal within our region,” he states. “We’ve noted major interest, for example, by several regional customers for nuts, peas and duff who are prepared to pay – on average – export parity prices for sized coal at the mine gate. We also, incidentally, have a distinct advantage over South Africa’s highveld coal mines when it comes to supplying the cement and lime industry in the Northern Cape.”

As regards operation of the new mine, Mike Nell, who is Maatla’s COO, says that an outsourced model will be adopted. “We have already lined up the plant operator while we have a shortlist of well qualified companies based in Botswana who can undertake the opencast mining and expect to make a contract award later this year,” he says. Nell, who is well-known in South African coal mining circles, has more than 35 years’ experience in the industry. His past appointments include a four-year tenure as CEO of the TSX-listed Homeland Energy, which included managing the development of the Kendal coal mine near Delmas in Mpumalanga.

Turning to the proposed Phase 2 of the Mmamabula project, Badenhorst says that Maatla’s view has evolved during the time it has held the project. “We initially looked at an IPP solution using 30 MW modules, as it is a lot easier selling 30 MW into the market than the 300 MW that some of the potential coal producers in Botswana are looking at for their mine-mouth power projects. The capex, of course, is also much lower. We’ve now, however, selected GTL as the best way to proceed in Stage 2. We’ve received an expression of interest from Botswana Oil for diesel offtake and an expression of interest for funding of the complete project.”

The technology for a viable, relatively small-scale GTL project is, says Badenhorst, readily available from two US-based companies which Maatla has identified. “The first part of the process would be to generate Syngas – Co and H2 – from the coal and then use this as the feed to a modular plant which would produce the liquid fuel. This plant would be based on new technology developed by our envisaged US partner although, at its heart, is the well-established Fischer-Tropsch process,” he explains. “The project would produce 3 000 barrels per day, which is approximately equivalent to 160 to 180 million litres per annum. We’ve submitted a proposal to Botswana Oil and are expecting the adjudication to take place this year.”

On the timing of the Phase 2 project, Badenhorst says this will be dependent on securing an offtake agreement. “Once this is in place, we envisage that it would take nine to 12 months to complete a feasibility study and a further 18 to 24 months to implement the project. So the earliest date for first production would be 2021. The capex is likely to be around US$250 million. We are very optimistic that Phase 2 will go ahead and that it will contribute to making Botswana, which currently imports all its petrol and diesel from South Africa, self-sufficient in liquid fuels,” he concludes.

Report and photo by Arthur Tassell