On the Cover: Located in a far flung area in Malmesbury, Western Cape, with no grid electricity connection in the vicinity, a Great Karoo Crushing owned quarry is running completely off the grid, relying on prime power supplied by a fleet of four generators powered by Scania engines.

When Great Karoo Crushing established its quarry just outside Malmesbury, one of the key contests was that the location is very far from utility electricity connection. The company had two choices, either to folk out millions of rands to get connected, or to go the generator route on a prime basis. The second option made sense, both from a cost perspective and reliability point of view.

Bear in mind that South Africa is currently experiencing an electricity crisis. A structural shortage of electricity supply remains one of the country’s most critical challenges going forward as legacy infrastructure ages and replacement is long overdue. With its four generators powered by the DC 16 power generation Scania engine, proving to be fuel-efficient and reliable, the quarry is flying high with no electricity disruptions to its 18-hour a day operating schedule.

Johan Louw, engines manager at Scania South Africa, says the quarry relies on two 700 kVA and two 500 kVA for all its power needs. At the heart of the four gensets is Scania’s DC16 engine, which, according to Louw, is proving to be a reliable and cost-effective power source. From a fuel consumption perspective, the quarry is recording about 105 litres of diesel consumption per hour on each unit.

Maximising productivity and reducing both the capital cost and cost per tonne can help quarries survive the typical boom and bust cycles associated with the construction sector. As an industry whose fate is tied to the cyclical nature of the construction market, quarry owners often feel the pinch of sustained dips in the market, and only feel the relief when prospects pick up again. Although quarrying companies can’t entirely disentangle themselves from this cycle of boom and bust, increasing productivity and seeking ways to reduce their costs can provide some shield against the downward cycles of the market.

The choice of equipment solutions plays a significant role in surviving the tide of an incessantly slow market. Buying decisions should consider the capital and operational costs, as well the ability to increase uptime and productivity, key parameters that make the difference between stagnation and profitability. Modular crushing and screening solutions tick all the right boxes as far as these parameters are concerned.

Modular solutions are not new to the quarrying sector. For decades, these ancillary solutions have been used from time to time, but in recent years they have become a staple for operations and contractors seeking long-term crushing and screening gains. One of the names that quickly comes to mind in the African marketplace as far as modular solutions are concerned is Pilot Crushtec International. The company has been at the forefront of the modular revolution since 2007.

Francois Marais, Director – Sales & Marketing at Pilot Crushtec International, tells Modern Quarrying that the company has popularised the modular solution since then. “We saw an opportunity to help clients who previously spent a lot of time, money and resources on designs and engineering of bespoke plants, when in fact they could benefit from standardised solutions that are much easier to turn around, easier to maintain and don’t require as much planning,” says Marais. 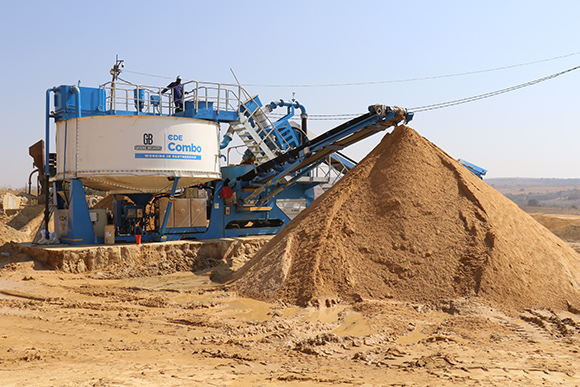 Having started producing sand and aggregates out of decomposed granite back in November 2016, Ground Breakers – the brainchild of two young entrepreneurs with a background in plant hire, logistics and quarrying industries – is fast becoming a sand producer of choice within its area of supply.

At the centre of its market leading position is the quality of its sand and the flexibility to produce to customer spec. Key to these capabilities is the recent investment in CDE’s patented Combo™ – the world’s first all-in-one wet processing plant.

Before investing in the CDE Combo, Ground Breakers previously deployed a bucket wheel system to transform the quarry’s raw feed of decomposed granite into construction sand and aggregates, with additional low-value fill or bedding products.