The 10th edition of Fulton’s Concrete Technology, commonly regarded as the South African “concrete bible” and globally recognised as a definitive handbook on concrete, was today on June 10 launched by Cement & Concrete SA (CCSA). 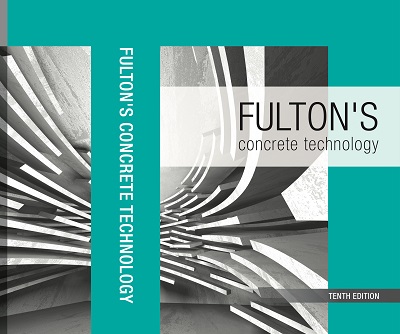 The latest edition of Fulton’s Concrete Technology comprises 37 chapters and features topics such as materials and mixes, concrete properties, manufacture, site practice, quality control and testing, as well as special concrete and techniques.  It is a hard cover book with searchable electronic flash card, available to the public with members of CCSA enjoying a discounted rate.

Bryan Perrie, CEO of CCSA, says several years of intensive research and coordination preceded the publication of the revised and updated Fulton’s Concrete Technology which was last published in 2009. The authors of the different chapters, selected to offer a combination of experienced and young professionals, were drawn from a wide range of backgrounds: academics and researchers, concrete producers and manufacturers, construction materials specialists, and consulting engineers.

“The 2021 ‘Fulton’s’ contains a wealth of new reference material and – with 10 new chapters – representing a significant update on the previous edition. There is, for example, strong emphasis on sustainability – an issue of global concern in all sectors of industry,” Perrie states.

He says the knowledge, experience and insights in concrete technology in the latest issue are as usual directed at South African conditions and will be welcomed by concrete practitioners and lecturers in diverse fields, as well as students for whom it is a prescribed reference work.

The first three editions (1957-1964), of what has become commonly known in the industry simply as “Fulton’s”, were written by Dr Frederick Sandrock (‘Sandy’) Fulton, then Director of the forerunner of the Portland Cement Institute which now has Cement & Concrete SA as its latest incarnation.

Perrie adds: “Subsequent editions of the book were multi-authored and multi-faceted because as concrete evolved into a much more complex material, it became extremely difficult for a single author to deal in suitable depth with all aspects of modern concrete technology. The fact that more chapters than any other in the new edition deals with ‘Special Concretes and Techniques’, illustrates this technological expansion.”

The latest ‘Fulton’s’ is edited by Prof Mark Alexander, Emeritus Professor of Civil Engineering and Senior Research Scholar at the University of Cape Town. A Past President of the global body, RILEM (the International Union of Laboratories and Experts in Construction Materials, Systems and Structures), Prof Alexander is the author of several respected concrete technology publications and his experience has been widely used in a consulting capacity both here and abroad.

He says the latest edition of the book comes at a time of unprecedented change and challenge in the world, including South Africa. “Tremendous demands will be made of professionals in future to address issues such as sustainability of concrete construction, impact of climate change, and population growth. This makes the need for authoritative, relevant, accurate and up-to-date information on concrete - which remains the world's most used construction material – absolutely vital.

“Sustainability is essential to produce concrete in a manner that meets the needs of the population without irreparably damaging the planet. Therefore, the sustainable theme is present throughout the book, with ‘Sustainability Focus’ in all pertinent chapters,” Prof Alexander adds.