On 4 September, the Doka production facility in Russia was officially opened. The aim is to tap into the huge potential of the Russian market, particularly in the residential and commercial construction sector. The new facility is located in the Lipetsk special economic zone, some 400 km south-east of Moscow, where a good infrastructure is in place for companies to do business.

On Tuesday, 3 July 2018, the cornerstone for the Production Unit Russia was laid at the 6-hectare site in the Lipetsk Special Economic Zone. Just over a year later, the production facility is officially opened. The newly founded Doka Lipetsk, a wholly owned subsidiary of Doka GmbH, is the Austrian company's first production facility outside the European Union. 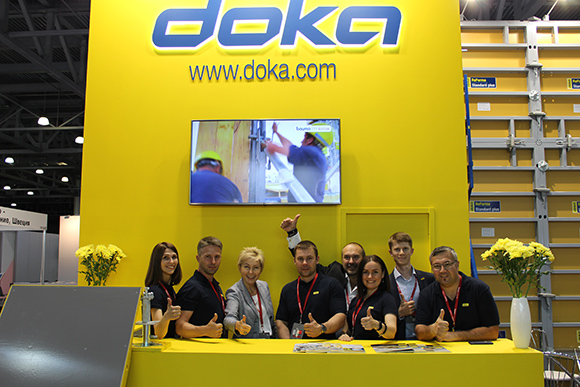 "The opening of a modern plant for the production of formwork systems by Doka in the Russian Federation is another step in the development of promising and mutually beneficial cooperation aimed at introducing high technologies and attracting investments in the development of Russian high-tech production potential", emphasises Andrey Gusev, Managing Director Production Unit Russia.

The 3 500 m² manufacturing facility produces formwork for Russia and other markets with similar requirements. Production will be stepped up gradually to a volume of 65 000 m² by next year. With the new production unit, Doka will sustainably increase the competitiveness in Russia and also use the great potential of the Russian market, especially in the residential and commercial building sector. By providing locally produced products for local markets, it is part of Doka’s idea of globalisation.

“This facility is a clear commitment to in-house production and sustainability. This enables us to achieve greater independence and strengthen our competitiveness of the entire Doka”, says Manfred Jungwirth, Director Production Business Development.

Doka Lipetsk is embedded in the organisation of Doka Production, making it the third manufacturing location after Amstetten in Austria and Banska Bystrica in Slovakia. The new facility has no influence on the production in Amstetten or Banska Bystrica, i.e. neither the product volume nor the number of employees will be reduced. The Lipetsk special economic zone was chosen because the good infrastructure makes it easy for producers to get started.

ReForma Standard plus: A rising star on the formwork market

Since the second half of 2019, Doka is producing the steel-framed formwork ReForma Standard plus in the new production facility, which will be primarily for the Russian market. It is designed for the construction of concrete and reinforced-concrete vertical monolithic structures – walls, columns and shafts and is a cost-effective formwork solution for residential and commercial buildings. At the bauma CTT in Moscow, the leading construction event in Russia, Doka Russia took the opportunity to present ReForma Standard Plus a bigger audience. Doka customers and visitors to the Doka booth could get hand-on experience with the new system and watched live demonstrations from the Russian WorldSkills team.