Westbury Clinic – a R23-million state of the art health facility that services more than 55 000 people and creates an environment that not only heals but promotes health and human dignity – won first prize in the Health Completed Buildings at the Berlin World Architecture Festival in November last year. 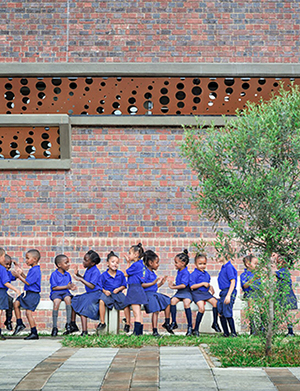 Corobrik Montana face brick has contributed to the successful Westbury Clinic which has won first prize in the Health Completed Buildings at the Berlin World Architecture Festival in November 2017.

As the world's largest architectural award programme, the World Architecture Festival Awards drew more than 2000 international attendees. There were a total of 924 entries from 68 countries. Westbury Clinic was one of only three South African projects shortlisted for the awards and the only one to walk away with a winner’s prize. It was designed for the Johannesburg Department of Health by Ntsika Architects which is headed by architect Nadia Tromp and is one of the country's first 100% black-owned architecture firms.

Since 2011, Ntsika Architects has designed 13 clinics. Three are currently still under construction. Two of these are in Alexandra Township and the other is along the Louis Botha Corridor of Freedom.

Tromp describes the Westbury Clinic project, which began in June 2014 and was officially opened on 6 December 2016, as “a pure Corobrik building which has now been recognized locally and internationally”.

It is located in the community of Westbury, along the vibrant Empire – Perth Development Corridor in Johannesburg. It offers comprehensive healthcare services, including tuberculosis (TB) treatment, chronic care, antenatal and post-natal care, child healthcare services, HIV care and cancer and prostate screening.

“The biggest challenge for us is creating buildings and spaces that are robust, while promoting health and human dignity. This can be difficult in marginalised communities which are often plagued by social ills and the lack of public space,” she explains.

English bond face brick was chosen not only for its aesthetic appeal but also because it promotes health and well-being and perfectly fitted the overall brief for the project.

The clinic was specifically designed to mitigate and reduce the transmission of airborne diseases (like TB) through various innovative systems whilst also eliminating stigmas attached to being ill which have become synonymous with public healthcare facilities in South Africa.

As Ntsika Architects explained in its brief for the award that one of the legacies of apartheid was that the many marginalized communities in and around South African cities had few public amenities. These landscapes were sparsely dotted with public buildings which were often behind a fence and had no response to place or civic presence.

On a purely practical note, the Westbury Clinic was designed to mitigate and reduce the transmission of airborne disease through various innovative systems, including overall layout, patient and staff flow and natural cross-ventilation.

In response to the limitations of the land, the clinic occupies the smallest possible area and opens up outdoor areas which serve as external waiting rooms.

The spatial layout of the clinic clearly separates functions preventing cross infection. A central reception area is filled with light in a double-volumed space. This waiting room serves the ground floor consultation rooms. A courtyard just off this space provides a welcome relief as a second waiting area on ground floor. The consultation wings are split over two levels. These are connected by a ramp which wraps the corner of the building. A mezzanine area is provided as a waiting area for the first floor consulting rooms. This opens onto a roof terrace which is used as a secondary waiting area.

“Well-planned exterior environments provide a greater sense of privacy and the circulation of cool air through the consultation rooms. The courtyard becomes the green lung of the facility. Planted trees creating shaded seating areas encourages patients to wait outside, where the chance of transmission of airborne disease is greatly reduced,” according to the architects.

The building itself is set back from the street edge, creating a generous public space. The double-storey street façade is designed with minimal high-level openings, creating a backdrop for life unfolding, while creating a safe, unsurveilled space. Landscaping softens the edge, providing shade.

With longevity and future maintenance in mind, the building was designed in face brick. The English bond face brick is reminiscent of the traditional face brick buildings in Joburg CBD and Newtown areas. Its aesthetics speaks to its surrounds, while simultaneously differentiating itself through its height and ‘monolithic’ aesthetic.

“When specifying materials for these specialised, public environments, we need to ensure that the materials are good quality, long-lasting and robust. This is why, for the Westbury Clinic, we specified Corobrik bricks. The Corobrik Montana brick specified was the perfect material in this harsh environment. It is a robust finish which is low maintenance and reminiscent of the old brick buildings of Johannesburg,” Tromp says.

She adds that the brick used was not a typical face brick finish. “Its colour is inconsistent, with some darker parts and some lighter bits. This inconsistent colour leads to very interesting shades on the facade. Depending on the time of day or how the light falls on the building and shadows are created, the building can sometimes look silvery grey and, at other times, appear more deep red. This is very beautiful. The English bond pattern is reminiscent of many of the historic brick buildings in Johannesburg. This relates the building back to the history of the city, whilst boasting state of the art finishes and innovation in other parts of the design.”

Ntsika Architects has used the same details on the Noordgesig Clinic in Soweto.

Noting US Green Building reports that demonstrate that indoor air quality can be 10 times worse than outdoor air on smoggy days in big cities, he said that the use of clay brick would mitigate this as it was a totally natural product that did not release toxic substances and resisted mould which was known to be one of the chief irritants for patients with lung diseases or allergies.

Facebrick, in particular, is the ultimate healthy building material as it does not need interior finishing and does not give off the volatile organic compounds (VOCs) that are usually associated with paints and varnishes.

“Clay brick is also associated with temperature and humidity control and can keep buildings cooler during hot Johannesburg summers and warmer during sometimes harsh Gauteng winters. This not only reduces the need for air conditioning and heating but reduces the possible transmission of airborne diseases such as Legionnaires disease which can be associated with poorly maintained HVAC systems,” he says.

Tromp says that the Westbury Clinic also demonstrates that social, economic and environmental value can be generated for local communities through a holistic approach to development.

“Local people were trained in the specific brick pattern employed and brickwork was done almost in its entirety by the local community,” she concludes.

Pump systems and training: a new and better...

Brittle fracture: what to watch out for