ON THE COVER: AfriSam was the specialist concrete supplier of The Leonardo. This project was the Joinnt Winner is the Specialist Suppliers or Contractors category in the recent Best Projects Awards. This mixed-use high-rise development will, on completion, will be the tallest building in Africa. The achievement on this project has greatly contributed to the knowledge and skills set of the South African construction industry for high-rise buildings.

The December issue of Construction World is dedicated to the winners and finalist of the Best Projects Awards that, for the 18th year, recognised excellence in the built environment. The 2019 instalment of the awards took place at a time in the country’s history when low confidence and adverse sentiment, primarily caused by a dire lack of government spending (civils) and now also private investment (building) are threatening the very existence of the South African construction industry as we know it. 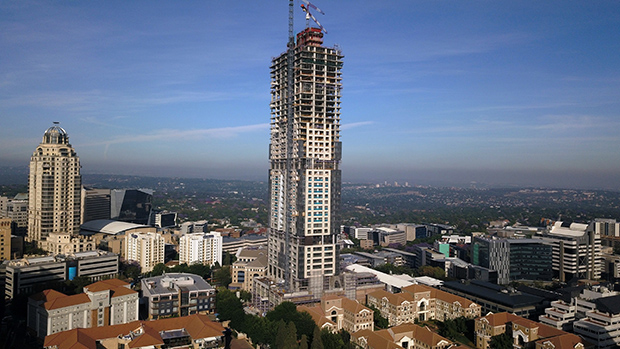 For the first time in its 18 year history, the Awards attracted no entries in the Civil Engineering category. As such it echoes the reality faced by the construction industry.

However, Databuild’s CEO Morag Evans believes that government can provide a much needed stimulus to get the industry back on track by starting a process consisting of five vital elements.

She believes that if government spends the funding that has been allocated in the national budget for vital infrastructure like roads, reservoirs, schools, hospitals, clinics and low cost housing the construction industry will be able to pull out of the depths it finds itself in.

Maintenance of existing infrastructure needs to be prioritised. The massive need for this will generate numerous construction projects and will employ thousands.

An area that requires immediate attention is the late (or even non-payment) of contractors. This has been and still is a major cause of job losses. The National Treasury regulations stipulate that contractors must be paid 30 days after invoicing. However, the cidb says that some 60% of all payments are made after this stipulation. The result is cash flow issues, liquidation and huge job losses.

The private sector, which has kept the construction industry ticking over until 2017 when it too started to decline on the back of low confidence levels, needs to be collaborated with in a more effective manner.

The tender process needs to be more transparent and open. Government needs to ensure that unnecessary red tape is minimised and complex regulatory measures must be simplified.

Evans says that “all economies fluctuate between periods of expansion and contraction and the improvement in business confidence between August and September is one of several signs that the construction market is beginning to turn. The steady flow of construction projects being put out to tender, of which many have been successfully awarded, also bodes well for the industry and we should soon start to see a further increase in momentum.”