ASX-listed Nzuri Copper recently released the results of a positive Feasibility Study (FS) on the proposed Stage 1 development of the company’s 85 %-owned Kalongwe oxide copper-cobalt deposit near Kolwezi in the DRC’s Lualaba Province. The Stage 1 project will be capable of producing 143 000 t/a of DMS and spiral concentrate products, equivalent to an annual average metal production of 19 360 tonnes of copper and 1 507 tonnes of cobalt, with the FS confirming a low capex and strong returns. 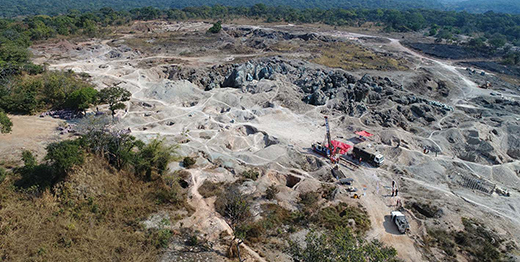 The study has been completed to +15 % accuracy and confirms the technical and financial viability of an open-pit mining operation utilising an on-site 1 Mt/a Dense Media Separation (DMS) processing plant to produce two high-quality dry saleable concentrate products suitable as a feedstock for off-site SX-EW processing. C1 operating costs are forecast at US$1,35/lb of payable copper production, including by-product credits. The Stage 1 life of mine is seven years and payback is estimated at 21 months.

Key financial highlights include a relatively low capital cost outlay of US$53,12 million, a rapid project construction timeline of just 12 months and attractive economics and financial returns including a pre-tax NPV10% of US$116 million, a post-tax NPV10% of US$82 million and a pre-tax/post-tax IRR of 71 %/55%.

The Kalongwe project is owned by Kalongwe Mining SA (KMSA) under a joint venture agreement between Nzuri Copper (85 %), La Generale Industrielle et Commerciale au Congo (GICC) (10 %) and the DRC Government (5 %). GICC is a Congolese company which is 90 %-owned by Theo Mahuku, a Congolese businessman who works with multiple listed companies.

The Kalongwe open-pit mining area was divided into two geotechnical domains/design sectors, the eastern and western domains, based principally on interpreted rock weathering depth. Open-pit design criteria were developed for each sector.

A groundwater evaluation was carried out by specialist consultants Knight Piésold (KP) as part of the FS. The aim of the evaluation was to assess the life of mine de-watering requirements for the open pit.

To limit the groundwater inflows into the pit and to depressurise the pit walls for slope stability, a borefield was recommended by KP. Nzuri has elected to install this borefield earlier than necessary in the mine life to commence this depressurisation early.

The proposed mining method at Kalongwe is conventional open-pit mining. Mine operations will utilise conventional drill-and-blast, truck-and-shovel open-pit mining methods and technologies proven at other locations throughout the region. All these activities will be managed and undertaken by Nzuri. Contract mining was evaluated during the FS and, based on tender prices, was not considered to be cost effective.

A process route was prepared incorporating the engineering and metallurgical design criteria derived from the results of the metallurgical test work and comminution circuit modelling. Detailed flow sheets, plant layouts and the plant design basis were developed by Lycopodium. The treatment plant design incorporates the following unit process operations:

According to Nzuri, the process flowsheet incorporates tried and proven technology and includes equipment from reputable suppliers. The decoupling of the crushing circuit from the DMS plants will result in higher overall plant availability, as well as providing operational flexibility regarding the crushing circuit.

The site is relatively remote and will require an access road to bring in equipment and personnel and to transport concentrate to customers. Existing unsealed roads built by Ivanhoe Mines to access its Kamoa and Kakula deposits will be utilised to reach a point within 31 km (by road) from the project site, after which a new ‘main access road’ will be built.

A power supply study has been carried out by ECG Engineering based on the plant and accommodation camp loads. The maximum power demand for the project is 2 219 kW with an average continuous load of 1 681 kW.

Owing to the site location and low plant loadings, no current opportunities exist for connection to the national power grid. Power will be provided by an on-site hybrid power station located adjacent to the process plant. The power station will utilise 7 x 400 kW prime rated high-speed diesel generators. In addition to the generators, a photovoltaic array rated at 600 kWp will supplement the on-site power station providing fuel savings to daytime generation. Solar power reduces the site’s unit power cost by approximately 9 % versus a straight diesel-only station.

Five tanks (58 000 litre capacity) are required to meet a 10-day diesel consumption criterion for the project. These container-sized packages will be located adjacent to the power station. The power station fuel storage will comprise a vendor-supplied package made up of double skinned self-bunded fuel storage tanks and pump skids. Two similar 58 000 litre packages will be positioned at the mine services area to supply the mining and the light vehicle fleets.

There are no suitable-sized towns or urban centres near the project site and therefore it will be necessary to build accommodation for the workforce. Initially, a temporary construction camp will be built with 170 beds. A permanent camp will then be constructed with 256 beds to accommodate operational personnel.

Water management is one of the key issues affecting the success of the project. Hydrological and site water balance studies indicate that make-up water is required throughput the project life. To support mining and processing operations, dewatering of the pit area will also be required and a diversion channel and dam will be built to divert the watercourse which currently flows over the proposed open-pit footprint. To reduce overall water make-up requirements, process plant water will be recycled through the TSF decant system utilising a thickener and a series of pumps and overland pipelines. Potable water will be generated by a water treatment plant located at the camp.

Commenting on the results of the FS, Nzuri Copper CEO Mark Arnesen said the FS demonstrated that Kalongwe was an outstanding project, characterised by high copper and cobalt grades, low capital and operating costs and strong financial returns. “The relative simplicity of the Stage 1 project and anticipated 12-month timeline to production, once funding and board approvals are secured, make this a very attractive foundation project for Nzuri,” he said.

“In addition, the FS highlights the significant upside that can be unlocked through future project expansions, including the potential for leaching of cobalt-only ore and mineralised rejects, potential off-take to some of the closer new SX/EW plants now under construction in the region, and the significant exploration upside both in the immediate Kalongwe licence and regionally within our Fold Thrust Belt Joint Venture, as highlighted by the major Ivanhoe Kamoa/Kakula discoveries next door to us and the growing momentum of our own exploration programme within the FTBJV (Fold and Thrust Belt Joint Venture).

“Nzuri is already actively pursuing these and other opportunities, which offer significant potential to increase mine life and production from Kalongwe above and beyond the Stage 1 project. With the Stage 1 FS now complete, Nzuri already has a wide range of options available to it to secure a funding package that will minimise dilution to existing shareholders and maximise returns from the project. These include funding provided by potential off-take and strategic partners and conventional debt funding.

“Our immediate focus over the next few months will be to close-out one or more of these opportunities while working hard to unlock the huge upside on offer, both at Kalongwe and within our Fold Thrust Belt Joint Venture.”